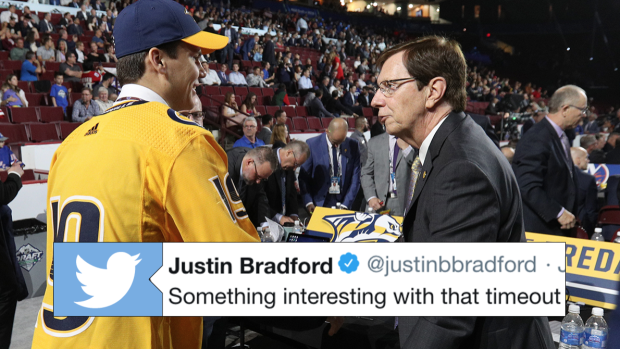 The NHL Draft has come and gone, and fans of every team are now digging deeper into every prospect their team selected with extreme optimism for what they could provide on the ice for years to come.

The truth is, aside from the prospects selected in the first round of the draft, most fans aren't familiar with the majority of the prospects taken, nor the fact that teams can actually take a timeout during the draft.  Yes, that's an actual thing and it happened this past weekend in Vancouver when the Predators took one in the 6th round.

The Predators just took a five minute timeout to further debate the...179th overall pick in the draft. They were immediately booed for it. Rightfully so.

They used the entire five minutes allotted to them, every last second, and took Isak Walther with that precious 179th overall pick. And got booed one more time just before picking.

We understand why there would be some booing, but we also wanted to know the story behind Nashville calling a timeout at that point in the draft and as we discovered, it's because the player they wanted to select wasn't in the NHL's system.

Something interesting with that timeout the #Preds took in the 6th round. The player wasn't in the NHL's system, so the timeout had to be taken to manually enter him. #NHLDraft

Because of what the Predators had to do in order to actual make this pick, Isak Walther might be one of the more noteworthy 6th round picks from this year's draft.