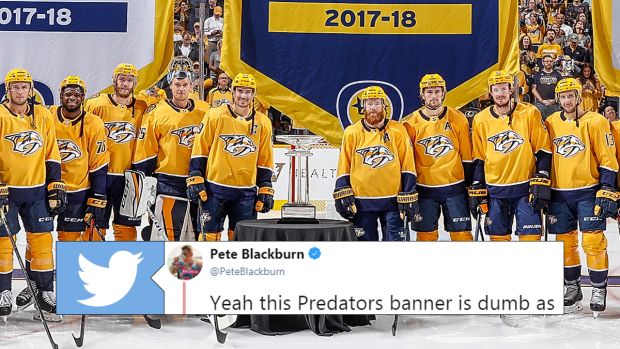 The Nashville Predators had a great season in 2017-18 that didn’t end quite like they’d hoped, but you wouldn’t be able to tell by their banners.

The Predators ended up getting eliminated by the Winnipeg Jets in Round 2 of the playoffs last year, which was an unfortunate ending because it seems a little unfair that the best team in the regular season had to play the second best team in Round 2. Still, that doesn’t make this make anymore sense.

The Predators raised three banners last night, with “Regular Season Western Conference Champions” being the oddest of them all.

When every job wants 5+ years experience so you stretch your accomplishments on your resume. pic.twitter.com/Wfa1TseblN

As Pete Blackburn points out, it’s also just a confusing banner, because although they had the other two, this one is just makes their season seem less impressive because they were actually the champions of both conferences.

Yeah this Predators banner is dumb as hell but it’s also hilarious considering it doesn’t even give them enough credit. They won the regular season in both conferences pic.twitter.com/aqYRq5kcNl

The people who hate participation trophies aren’t going to like this one.