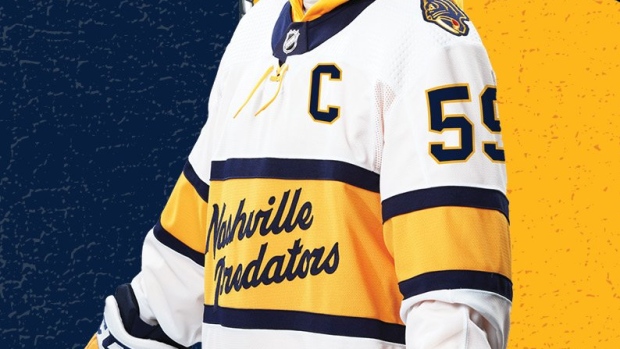 The Nashville Predators are going to make their Winter Classic debut this season, taking on another fellow newcomer to the event in the Dallas Stars.

On Saturday, the Preds unveiled their Winter Classic jersey, and we definitely have some thoughts about the college hockey-ish look.

Okay, so a bit of hockey history: While they may resemble college sweaters, these jerseys are actually a throwback to the Nashville Dixie Flyers, which played in the now-defunct Eastern Hockey League from 1962 to 1971. While the Dixie Flyers were a short-lived franchise playing in just the minor professional level, they predate the Predators by over 25 years, so it’s cool to see the Preds throwing it back to Nashville’s earlier puck days.

As for the look of the jerseys... Well, the basic wordmark design that we mostly see in college hockey seems to be popular again in the NHL, if the Hurricanes’ new road uniforms this season are any indication.

We don’t know if it’s for everyone, but hey, they seem to be digging it in Nashville.

To everyone who is uneducated on the history of Nashville hockey it’s a throwback to the 60s and the Dixie flyers jerseys pic.twitter.com/PjFUlpVL67

some don’t like these but these are just fantastic, bringing back original nashville hockey

Every time I see it, I love it more. The retro look is really, really cool and, as a fan, I appreciate the tribute to hockey history, Nashville and the Dixie Flyers. Well done #Preds!

I’m not a predators fan but I like it