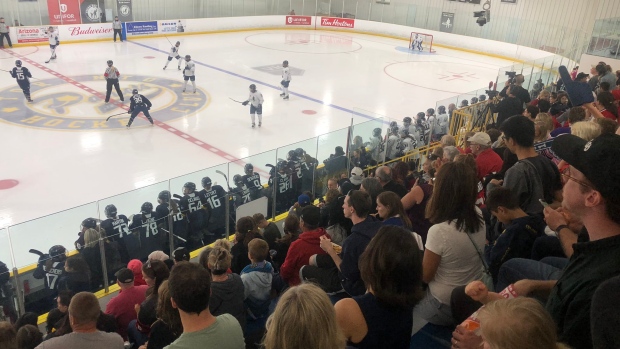 Formed by over 200 women’s hockey stars in their efforts to build a sustainable hockey league, the Professional Women's Hockey Players Association took Etobicoke’s Westwood Arena this weekend for the first leg of their Dream Gap Tour — a series of tournaments designed to showcase the best of the women’s game.

Fans were treated to some quality action, including even a buzzer-beating goal to force overtime by Blayre Turnbull (completing a hat trick, to boot). Stars such as Marie-Philip Poulin, Hilary Knight, Natalie Spooner and Sarah Nurse were all in action this weekend.

🚨TURNBULL🚨@katbt617 completes the hatty as she throws the puck on net in literally the FINAL seconds of the game and it finds its way to the back of it...

WERE GETTING OVERTIME HOCKEY HERE IN TORONTO pic.twitter.com/JJ6ddJQECf

Of course, this experience is all for the fans, and especially for the younger girls in the crowd who want to see what professional women’s hockey is all about. On that front, it was a rousing success. Players stayed late to engage with fans and sign autographs.

We think Jordyn is pretty amazing too pic.twitter.com/NymLZSz0h2

This is our daughter. And she wants to thank all of the women who came to play today @UniforTheUnion @PWHPA #DreamGapTour. You all continue to inspire her. #ForTheGame https://t.co/yCw3x1rPto

Look at the stars.
Look how they sign for you. pic.twitter.com/Z0HAhwnDBG

Great to meet you Dani! Thanks for coming out to cheer us on! @PWHPA https://t.co/qeHaJVS5bL

The first day of the #DreamGapTour left us speechless! The time is NOW for young boys and young girls around the world to have the EQUAL opportunity to play hockey for a living! Thank you fans, friends, sponsors, volunteers.. you’re all MVPs in our eyes! 🙌🏼 #ForTheGame pic.twitter.com/yTr9iOwRA8

This is definitely heartening to see. While the immediate future of pro women’s hockey in North America may seem murky at the moment, the turnout for events such as these is reflective of the support that these women have from hockey fans, and it bodes well for the state of the sport going forward.

The Dream Gap Tour moves on to Hudson, New Hampshire next on October 4-6.

THANK YOU to every single person who attended or watched the stream this weekend! pic.twitter.com/tCdhFhkoZr