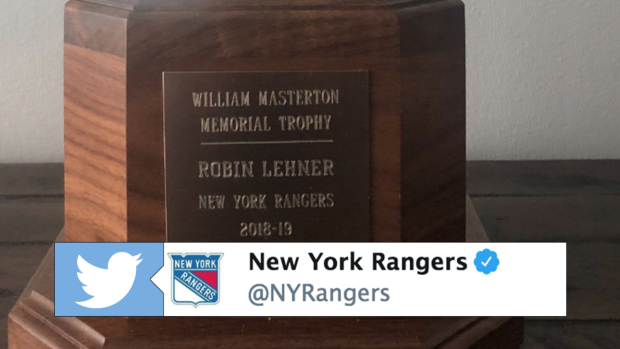 The Battle of New York in the NHL is one with a ton of history and while there are technically three teams that call the area home, the Rangers and Islanders have New York in their name and bad blood in their past.

Saturday, another page to the rivalry was added thanks to a mistake made on Robin Lehner's Bill Masterton trophy.  Lehner won the award with the Islanders last season, but the team name on the trophy he was given didn't exactly reflect that.

You had one job...🤔 pic.twitter.com/fmzYQWKuFf

Of all the teams they could have put on the trophy, it had to be the Rangers.  Islanders fans were obviously not impressed, but the Rangers were classy in their response to the mistake on Twitter.

We're sensing a HINT of sarcasm, but nonetheless, you have to appreciate the congratulatory tweet (if you're not an Islanders fan, of course).

Only way a Ranger gets a post season award.