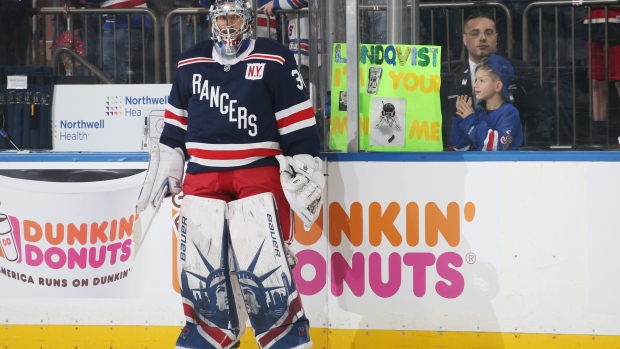 The New York Rangers are barely out of a playoff spot, but it seems like their management group is fully committing to a rebuild.

In recent weeks, new has started to leak out that the Rangers are open to trading both Rick Nash and Captain Ryan McDonagh. Now it’s starting to seem like no names are off the table. The Rangers issued a bizarre letter to their fans in which the basically state that familiar faces are going to be on their way out this season.

A Message from Glen Sather and Jeff Gorton. pic.twitter.com/Q56CXS8vDc

When you think of familiar faces in New York, there are few people that would come to mind before goalie Henrik Lundqvist. Oddly enough, Lundqvist appears to want to stay in New York.

Exclusive. Lundqvist tells Post: "Whatever path they take, I'm in...I want to be here and battle through the ups and downs...I want to play for one organization. It's important to me. I love it here." https://t.co/FAzUtZing6 via @nypostsports

Whether or not that will be the case will be up to him as well. He does have a no-movement clause in his contract, but it’s unclear if they will ask him to wave it.

His contract is pretty huge. He is set to make $8.5 million until 2021 and his age 39 season. It’s starting to seem more and more like one of the greatest goalies in his generation of the NHL will never win a cup. There are few goalies in the all-time greatness ranks that has failed to secure a cup, but Lundqvist’s dominance has been hard to ignore.

So who will be on the way out in New York? Rick Nash and Ryan McDonagh are a fair guess, but there are some other players around the age of 30 that may not have signed up for a re-build. That includes the team’s big offseason acquisition, Kevin Shattenkirk and the other assistant captains, Mats Zuccarello and Marc Staal.