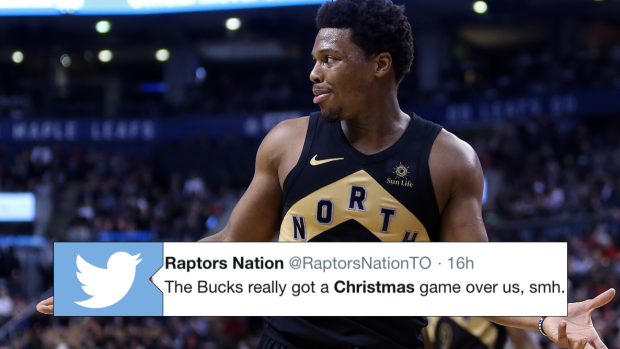 For the 17th consecutive season, the Toronto Raptors won't be playing on Christmas Day.

For the 17th straight year the Raptors won't be playing on Christmas Day. Toronto management/ownership pushed hard, I’m told. The NBA has its reasons, all of them business-related, but that doesn’t mean it sits well with Canada’s team, or its fans.

Christmas Day games are reserved for marquee games featuring the best players in the NBA and it's understandable as to why the Raptors haven't been featured in one up to this point, but this season would have been the perfect time to end that streak.

Kawhi Leonard is now a Raptor and his return to San Antonio is going to be a game everyone tunes in to watch.  Putting that game on Christmas day seemed like a logical option, but it didn't come to fruition.

NBA on Christmas Day should be 🔥 (First reported by @nytimes, confirmed by ESPN.) Note: Lakers-Warriors will also air on ABC.

The Raptors finished first in the East last season and have worked extremely hard to gain the respect of fans and players outside of Canada.

Not getting a Christmas Day game again, though, has Raptors fans feeling upset and slighted by the NBA.

It’s stupid. The NBA would benefit big time as Toronto is already a top 5 market not even mentioning a Spurs vs Raps game. Everyone would want to see DeRozan’s return. Not even mentioning that we have Rockets vs Okc which was a matchup last Christmas.

The NBA is not making a good case with regards to marketing the game globally if it is still very much American centric...

The NBA doesn't do smart things that make sense. They are dummies. I've solved the problem.

PLEASE LORD LET ME GET A RAPTORS-SPURS GAME IN SAN ANTONIO ON CHRISTMAS DAY https://t.co/WhfTTT9nR1

Let’s never have the Raptors on Christmas Day conversation again. If it didn’t happen this year with Kawhi/Demar trade, it’s never going to. Message sent. https://t.co/alsZlTKEOU

No Raptors on Christmas this year... pic.twitter.com/UPYVbvQGrB

Raptors: "we got Kawhi now! He's a Finals MVP! we won 59 games last year! we demand a Christmas game"

They have the Blazers and Jazz on Christmas Day but not the Raptors or Spurs? pic.twitter.com/YuUYOWkL4m

I’m not angry w/ the NBA for omitting the Raptors from their Christmas slate (again), but I need to understand the reasoning.

Toronto’s been a consensus top 6 NBA team for 3+ yrs now. They have their superstar, a crazy talented roster, rabid fanbase, beautiful city.

If there was ever a year that I thought the #Raptors would have a Christmas Day Game, it was this year. The fact that the @NBA couldn't see the gold SA/Tor could generate is fundamentally asinine
Face it guys, it's never going to happen. Unfortunately ratings are king#WeTheNorth

No Raptors Christmas Day game... so that excuse still won't work with your family.

The Bucks really got a Christmas game over us, smh.

One small market but winner. Other a loser but big market.

The Raptors... well there's really only one reason left.

the NBA should break character and have a Raptors-Spurs tilt in San Antonio on Christmas Eve.

If there was ever a year the Raptors should play on Christmas ... sheesh.