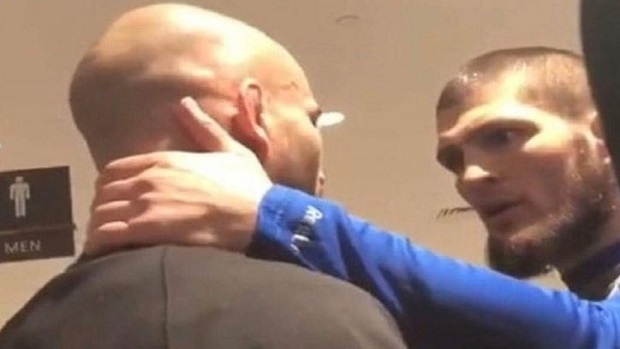 Conor McGregor always tends to go over the line, but Thursday afternoon he took things way too far following the UFC 223 media day in Brooklyn.

Many speculated it was a publicity stunt when it first happened, but as he was arrested and brought out in handcuffs today, it became clear this was no joke. Everyone has seen all different angles of videos of McGregor whipping the dolly through the window, but not too many people are talking about why it all happened. First off, McGregor had no reason to be at Thursday’s media day, but he decided to show up after his teammate, Artem Lobov, was involved in an altercation with Khabib Nurmagomedov.

Lobov and Khabib got into a heated argument in their hotel a couple of days ago and Lobov ended up getting cornered by Khabib and his entourage. After the two exchanged a lot of heated words, Khabib decided he had enough and slapped Lobov, which did not sit well with McGregor as he flew his entire entourage out to New York from Ireland on his private plane just to make a statement.

Although Lobov did not react the same way McGregor did, he still got bounced from Saturday’s fight card for his involvement in the entire thing. Obviously the UFC and some of the fighters are very upset with his actions, but some people are actually praising his loyalty.

I’m not condoning Conor McGregor’s actions, but find yourself a friend that will literally fly in from another continent to defend you.