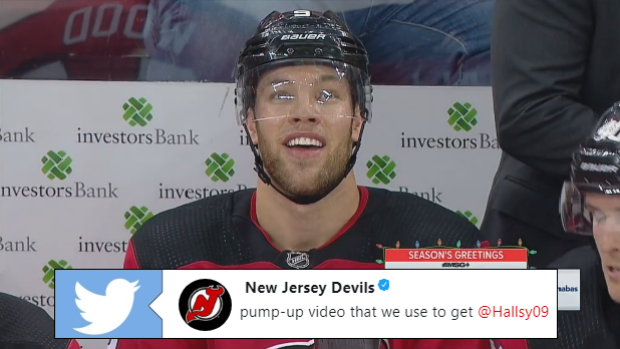 Taylor Hall gets excited after viewing a Ric Flair montage in Devils' game against the Rangers. , r/Hockey

New Jersey Devils forward Taylor Hall was the focal point of the hockey world last night after he was caught getting unusually pumped up on the Devils’ bench. The root of Hall’s excitement stemmed from a video that was shown on the Prudential Center’s jumbotron late in the third period.

During a whistle break with 5:28 remaining in regulation, the 26-year-old glared at the big screen with excitement as a Ric Flair video was played to pump up the crowd. After imitating the wrestler’s iconic “woo” chant, Hall nudged teammate Miles Wood repeatedly and was evidently amped afterward.

New Jersey #Devils forward Taylor #Hall was fired up after hearing a speech by wrestling legend Ric #Flair on the jumbotron 🔥. . More at BarDown.com (📸: r/Hockey)

The video received its share of attention, but fans absent from the game weren’t provided with the actual video that was played. The Devils’ social team felt as though viewers deserved to see Flair in action and decided to post the original video on social media. As you could expect, the 57 second sequence is essentially a series of clips featuring Flair going nuts.

ICYMI: Here's the @RicFlairNatrBoy pump-up video that we use to get @Hallsy09 and the #NJDevils fired up in the third period! 👊 pic.twitter.com/kh3uJtLnen

Yeah, that’ll definitely do the trick.

This wasn’t the first time Flair was used to pump up a hockey team either. Earlier this year, Fredonia Blue Devils goaltender Nick Harper led a legendary Flair chant in his team’s locker room.

Who needs music when you've got Ric Flair chants to pump you up 🗣 . (Via: @Fredonia_d3hky))

Flair’s magic seemed to work for the Devils (New Jersey that is), as the team was able to come away with a 4-3 shootout win over the New York Rangers. After last night’s magic, the team will likely be playing his clips at every home game going forward.