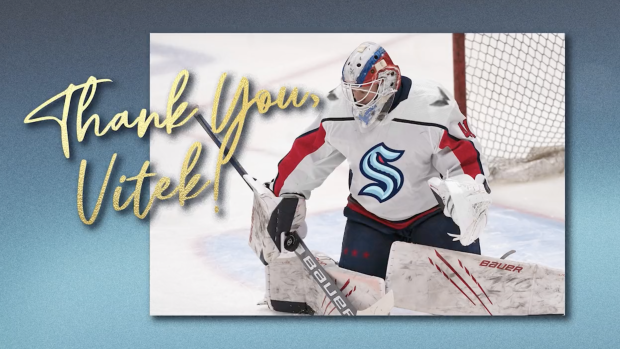 When a player returns to take on their former team, it’s tradition for that player to receive some sort of recognition, especially if they were a star for the club.

So that’s exactly what the Seattle Kraken did as Vitek Vanecek and the Washington Capitals visited Seattle for the first time in franchise history.

Vanecek was selected by the Kraken from the Capitals in the expansion draft this past summer, then was hilariously traded back.

Who said no take backsies, right?

So as the two teams met Sunday, the Kraken decided to pay tribute to the one that got away.

welcome back to a true kraken legend. pic.twitter.com/EsGC5mudGX

And as a few hockey fans were banking on the Kraken continuing on with the joke, others were surprised yet overall entertained.

they saw my tweet they did literally this https://t.co/z9jbPbCOjY pic.twitter.com/CQuvup0lLb

One of the best highlight reels you’ll see this season. https://t.co/S9i8eTLTwe

What a touching tribute https://t.co/MrfmvM8vs3

So when are ya'll retiring his jersey? https://t.co/pnt2YlrhT2

Ayo they actually gave him a tribute💀💀💀💀 https://t.co/Nhl6YMiSmh

The Kraken social team is absolutely killing it, well done!