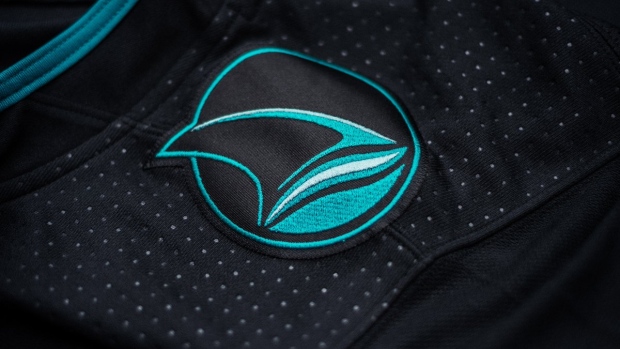 If you’re going to unveil a new third jersey, you might as well do it in style.

And if there’s anyone that knows a thing or two, it’s Erik Karlsson.

During the San Jose Sharks exhibition game against the Vegas Golden Knights on Saturday night, the club brought out Erik Karlsson dressed in full gear to model their new black and teal “Stealth Mode” uniform.

“He looks good in that jersey, doesn’t he?”

Erik Karlsson can look good in any jersey. Great flow, too. Now that’s how you introduce your new superstar to your fan base. What a fantastic idea by the Sharks and their marketing team, especially when you consider that Karlsson wasn’t even dressed in the lineup and has yet to partake in a game at the SAP Center, or the "Shark Tank."

Here’s a couple of close up looks of the aesthetically pleasing uniform.

From the Sharks’ press release:

“In collaboration with Adidas, the Sharks set out to create an all-new adizero Authentic Pro third jersey that pays homage to Northern California, embraces the tech culture of the region, and adds to predatory nature of Sharks with a sleek new black-on-black look. Fusing the future with the past, the sleeve stripes feature a digitalized circuit pattern that subtly incorporates a "SJ" pattern, while tonal shoulder patches are a throwback to the original patches worn from 1991-1997. Additional details include "This is Sharks Territory" is emblazoned across the interior neckline.”

“At the forefront of innovation, design and craftsmanship, the Adidas adizero Authentic jersey takes the hockey jersey silhouette to the next level by redefining fit, feel and lightweight construction. The Adidas adizero Authentic jersey is lighter, cooler and stronger, featuring adizero lightweight cresting and twill numbers, Adidas Climate® technology and Aeroknit detailing, the platinum NHL Shield and an interior fight strap."

For more on the production of the jersey, watch this video below.

What do you think of them? Let us know in the Facebook comments, or tweet us @BarDown.