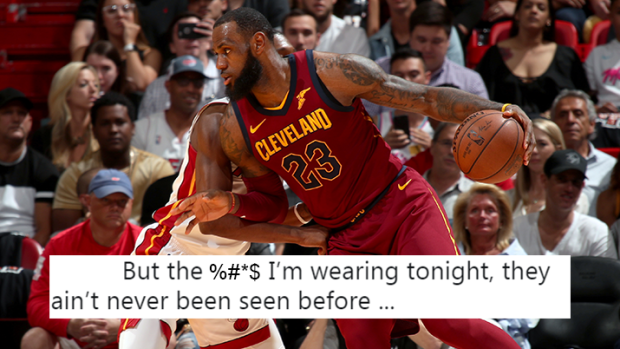 Anyone who knows LeBron James' signature footwear line with Nike knows that with every annual version of his shoe comes a 'South Beach' inspired colourway.

This year, LeBron decided to wait until the Cavliers actually traveled to Miami to play the Heat to drop this year's version, and his decision to do so seems to have triggered NBA fans into having flashbacks about "the decision."

Tuesday, ahead of the Cavs game against the Heat, LeBron announced that the shoes he would be wearing during the game would be something "never been seen before."

What you think's coming out the King's bag tonight?

LeBron unleashes a "South Beach" colorway for his game in Miami tonight. 🔥 pic.twitter.com/OiIbBgSBAG

While that didn't exactly turn out to be true, as the South Beach version of his shoes have definitely been seen before, it still shocked fans. Especially those who are looking to read into every single one of LeBron's actions to determine where he'll be playing next year.

Everyone in Cleveland rn: pic.twitter.com/rX3QD4RCe7

Lebron back to Miami confirmed

This likely (definitely) has no bearing on where the King will be taking his talents next season, but it's interesting to see just how big of a commotion he can make by simply wearing a different pair of shoes.