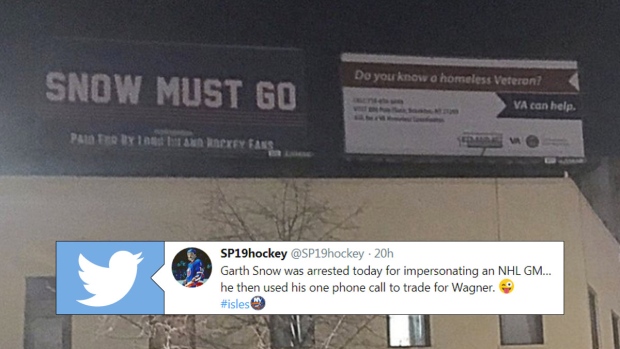 New York Islanders fans have had enough of president and general manager Garth Snow and their feelings about the former NHL goalie are now on display in New York.

A couple of weeks ago, Isles fans came together and started a Go Fund Me page as a way to raise funds for “SNOW MUST GO” billboards near the Barclays Center. It didn’t take them very long at all considering they shattered the initial goal of $2,725 in less than three hours.

Since the online pledge was started just under two weeks ago, they’ve already doubled the final goal to $5,450 so they can purchase two billboards and the Isles fans didn’t waste any time shattering that goal either.

If you thought these Islanders fans were bluffing, they weren’t.

The angry Isles fans clearly weren’t bluffing when they made the Go Fund Me page and now they have two massive “SNOW MUST GO” billboards to show for their efforts.

I could be witty, could toss out some quick jokes. I could be angry, complain more about the incompetence and mediocrity that this franchise celebrates.

I'm just tired. Garth Snow should not come within 100 yards of an NHL front office for the rest of his life. That's really all

Garth Snow was arrested today for impersonating an NHL GM…
he then used his one phone call to trade for Wagner. 😜#isles

To add to the entire thing, fans are still making online donations to the pledge and are signing up on the site using current and former Islanders players’ names.

The Islanders are in a bit of a messy situation right now and it’s only going to get worse if they fail to re-sign John Tavares this offseason.