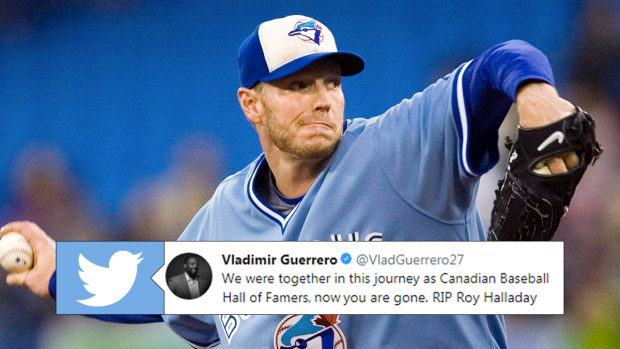 Roy Halladay is a name well-known in the baseball world, but today he is mourned by a much larger population.

Halladay, a former Blue Jay, owns a plane that crashed into the Gulf of Mexico today and it is now confirmed that he was flying it and passed away in the accident. Halladay flew his plane as a pastime, telling NBC Sports that he logged 800 hours as an airplane pilot as of March:

"I got my instrument rating, my multi-engine rating and I'm working on my commercial rating. So, I'm trying to progress through it. I'd like to be able to instruct so I can teach my boys."

Halladay was obviously a Blue Jays legend, but his work ethic and positivity was known league wide. An outpouring of sadness has come from all around the sports world.

Statement from the Blue Jays organization on the tragic passing of Roy Halladay: pic.twitter.com/Ih8D0RQE9p

We are saddened by the tragic news that Roy Halladay, 2-time Cy Young Award winner & 8-time All-Star, has died in a plane crash. He was 40. pic.twitter.com/SOFv3bOLyt

Devastating. One of my favorite teammates ever. The blueprint for what a competitor looks like.
RIP Roy Halladay. Heartbroken for his family

We were together in this journey as Canadian Baseball Hall of Famers, now you are gone. RIP Roy Halladay pic.twitter.com/x5Vv0r8djx

In shock over the terrible news about Roy Halladay... a pitcher I grew up admiring & rooting for. Praying for his family & friends. #RIPDoc

So sad to see this news 🙏🏾🙏🏾🙏🏾 RIP. Great person,great teammate and human being,my condolences goes to the Halladay Family.

RIP Doc, I loved watching you pitch as a kid and I was absolutely honored to share the field with you and see your last start albeit from the other dugout. My thought are with your family, friends, and teammates. Tragedies like this suck. Baseball lost another all around great guy.

Growing up watching #32 take the mound every 5 days for the @BlueJays was a pleasure. He was an athlete I️ idolized. RIP Doc

RIP Doc. I remember watching you in awe as a kid, your legacy will forever live on. Love those close to you. https://t.co/cMeiEXuCoV

RIP. Thoughts and prayers with his family. https://t.co/gcHrmWgiN9

Being a kid from Colorado, this man was my hero growing up!! Was a pleasure to watch pitch. Can't believe this happened https://t.co/F3yRacz5fx

RIP. Thoughts and prayers with his family. https://t.co/gcHrmWgiN9

RIP to the greatest blue jay I ever got to watch play. Competed harder than anybody when he was on the mound! #32 #RIPDocHalladay

Very sad to hear of the passing of Roy Halladay. My favorite pitcher growing up watching the jays. Thoughts and prayers with his family. RIP

Heartbroken over Roy H. He was the not only the standard of excellence in the game of baseball but in life! Will miss u my friend..