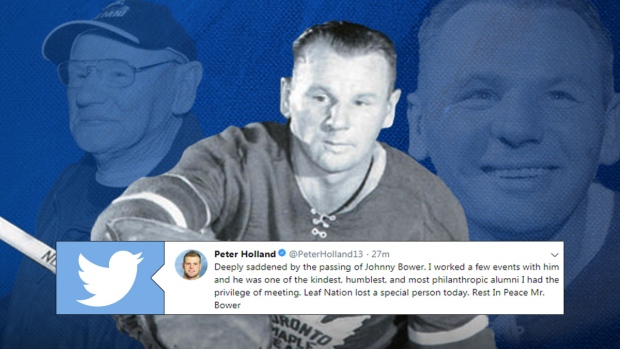 The world lost a great human being on Tuesday evening after news broke that NHL legend and Hockey Hall of Fame inductee Johnny Bower passed away at the age of 93 after a short battle with pneumonia.

Bower was known as “The China Wall” throughout his NHL career and you can understand why when you look at his long list of accomplishments. Over the course of his NHL career, the Prince Albert, Saskatchewan native won the Stanley Cup four times and was a two-time Vezina Trophy winner.

"There may not be a more loved Toronto Maple Leaf nor a former player who loved them as much back.”

Thank you for everything, Johnny. pic.twitter.com/6ABQV0ZtjS

However, while a lot of current hockey fans never got a chance to see Bower play between the pipes, it didn’t matter because he was still one of the most respected players of all-time, especially throughout the City of Toronto.

The hockey world mourns the loss of Johnny Bower.

It didn’t matter if you’re six or 66, Bower always made time for the fans and made the most fantastic impression on everyone he encountered over the years, regardless of their status.

I'm stunned and saddened by the passing one of the greatest Maple Leafs ever. Spending time Johnny was a blessing as he was the kindest most humble man. We will all miss you #Bower #1 pic.twitter.com/zcxWqNoUTY

One of the classiest guys I have ever been around. Always had time for the fans and the city of Toronto. Rest in peace Johnny #1

Had the pleasure of golfing with him a few years back. What a true gentleman. #RIP https://t.co/fSt9UK6NXg

Johnny Bower was a fierce competitor in a tough league. But his greatest legacy will be his kindness, decency and dignity. A true giant of a man in all the ways that count. May he Rest In Peace. #Leafs pic.twitter.com/IJeaoyRWJn

RIP to a true #TorontoMapleLeafs legend, The China Wall himself #JohnnyBower one of my childhood icons. Forever blue and white. #GoLeafsGo

RIP Johnny Bower. I certainly stole some moves from you. #hockey #hero pic.twitter.com/COqmfhhIXj

The great Johnny Bower has passed away at 93 years old. The Leafs legend will be missed greatly by hockey fans in Toronto and around the NHL. Such a wonderful spirit. Thoughts and prayers are with his family and friends. pic.twitter.com/QeFUZpLlVJ

One of the great Maple Leafs legends was a gracious person. RIP. https://t.co/AvsWma7SVd

My condolences to the family of #JohnnyBower... we lost a true legend of the game and a @MapleLeafs great #RIP https://t.co/ra2Bor35ec

Not many players can leave a lasting impression on fans long after their playing days, but Bower was unlike any other person you had ever met. He always took part in community and team initiatives, and was always finding different ways to stay busy by giving back to the community.

Did an NHL Alumni event years ago honouring Johnny Bower. His whole family was there...kids, grandkids.They asked me to read a letter they all wrote him. It was clear he was an even better Dad/Grampa than the man we saw publicly (which is saying something). Just a wonderful guy.

Heartbroken to hear of the passing of Johnny Bower. Honoured to have known this Maple Leaf Icon. Legend. #RIPJohnnyBower pic.twitter.com/fYZ66jyKyE

A sad day for #LeafsNation as we say good bye to @MapleLeafs #Legend Johnny Bower. You were a true ambassador for the @NHL and our Leafs. You will be sadly missed but never forgotten. Rest easy our China Wall 😢#RIPJohnnyBower pic.twitter.com/ANz8n08l23

So sad to hear that the most beloved Maple Leafs player of all-time, Johnny Bower, has passed away. #Leafs #TMLtalk #NHL

RIP Johnny Bower, truly heartbroken right now. You'll always be remembered for your time as a hockey player but even more so for how wonderful of a person you were.

Can’t tell you how saddened I am to learn of the passing of my idol,hero,mentor,friend. Johnny Bower was one of a kind Much better person than athlete and he is a Hall of Famer Deepest sympathies to wife Nancy the kids and grand kids. A big part of the Leafs has left us RIP #1 pic.twitter.com/wehEXjiqda

Deeply saddened by the passing of Johnny Bower. I worked a few events with him and he was one of the kindest, humblest, and most philanthropic alumni I had the privilege of meeting. Leaf Nation lost a special person today. Rest In Peace Mr. Bower

The Canadiens organization is saddened to learn of the passing of Leafs legend Johnny Bower. Our thoughts are with his family and friends and the entire Maple Leafs organization. pic.twitter.com/4SUOLfVIMA

Saddened to hear of the passing of Leaf legend Johnny Bower!
Loved him as a goalie, loved him as a person! pic.twitter.com/O9cVZviiPA

Bower was idolized by young and old Toronto Maple Leafs fans throughout his life, but he was always a man of the people. He never let his legendary status get to his head and was one of the most humble human beings you’ll ever meet.

The world lost a great goalie today, but they lost an even better human being.