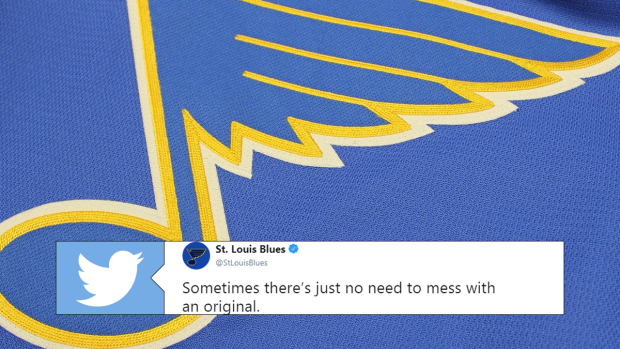 The St. Louis Blues unveiled their third jersey on Sunday, and it calls back to the minimal look that the team rocked in their inaugural 1967-68 season.

Modeled by Vladimir Tarasenko below, you can see that the Blues have elected against any bells and whistles, instead keeping things simple with a clean design. (Just look at that powder blue putting in work!)

Sometimes there’s just no need to mess with an original. https://t.co/ZrP7ELaJTN #stlblues pic.twitter.com/ilpRaxLbAj

Some detractors have remarked that the jersey isn’t so different from the team’s primary look, but we politely disagree. Without the navy striping on the shoulders and sleeves, the powder blue and gold on this jersey absolutely pop. It’s a subtle, but sweet, callback to the 70s.

The Blues aren’t the only team to announce a return to roots lately, as the New Jersey Devils unveiled a heritage jersey for the upcoming season that reworks green into their on-ice look.