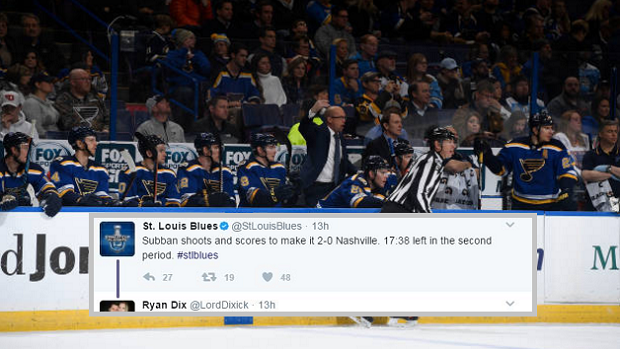 The St. Louis Blues lost to the Nashville Predators last night, in part because of a dominant performance from PK Subban.

The Nashville defenceman finished with three points (One goal, two assists) and even got to spend some time with his old friends from the Blue Jays after the game. The Blues were defending him all night on the ice, but off the ice they were defending him from one fan’s racist comments.

After Subban put the Preds up 2-0, this exchange happened on Twitter.

The guy tries to claim that this was a “joke” or “sarcasm”, which might even make it worse.

Full credit to the Blues on this one, as many people may have just ignored it, but instead, they drew attention to the twisted thought and we’re sure he got the message. He has since deleted his Twitter account, so we’re sure more than just the Blues let him know what they thought.