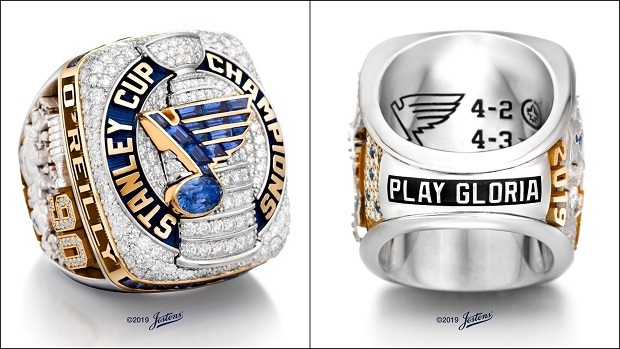 The St. Louis Blues are heading into an NHL season as reigning Stanley Cup champions for the first time in franchise history and it was well-deserved as they managed to go from the bottom of the standings to the very top in the second half of the season.

With the start of the 2019-20 campaign right around the corner, the Blues received their official Stanley Cup champion rings on Monday evening and they’re absolutely gorgeous.

The front of the ring is like most championship rings, as it includes the team’s logo and the Stanley Cup made out of diamonds, but it’s the sides of the ring that makes it stand out even more and sets it apart from previous Stanley Cup champion rings.

The two coolest parts about the ring that Blues fans will definitely love would have to be the fact that it reads ‘PLAY GLORIA’ on the band, and it includes Laila’s name on the inside of the ring.

Hopefully the team has replica rings ready to hand out to their fans because every Blues fan is going to want one of these.