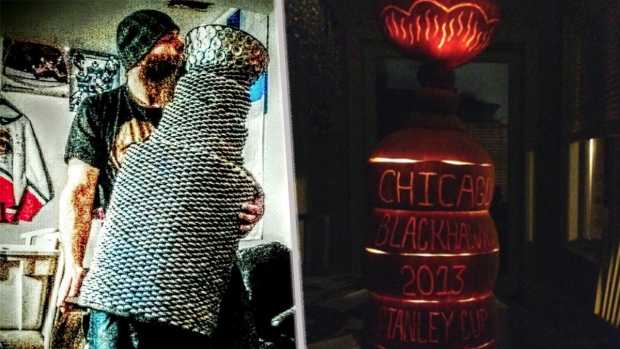 Yesterday, BarDown stumbled across one of its favourite Stanley Cup replications of all-time.

Reddit user Oppie30 posted a photo of his replication of the Stanley Cup. It was made entirely out of beer caps. This not only symbolizes the fan experience, as many fans enjoy cracking a cold one with the boys (and girls) while enjoying the game, but it also represents the tradition of consuming some drink from the cup itself. On top of the symbolic factor, the cup is also almost exactly proportional to the actual hockey trophy.

In response to our appreciation of his creation, Oppie30 sent a photo to us with a clearer look at the beautiful replica.

A bottle cap Cup is something lots of diehard hockey fans would love to have in their man cave. While most could eventually accumulate enough caps to make it happen, a few of these other replications wouldn’t be so easy.

Back in 2010, Hershey’s Canada Inc. partnered up with the NHL to make a Cup out of chocolate. The replication would end up weighing over 150lbs (a tad bit heavier than the real Cup, that weighs in just under 35lbs) and took around 12 hours to make.

This is the classic replication material. It’s cheap, easy to acquire, and the same sort of colour as the real thing. You’ll often see aluminum foil cups in the audience during playoff matches, although they are rarely up to the real size of the Cup.

This is a very “hockey guy” replication. For whatever reason, chewing tobacco seems to have infiltrated hockey culture almost as heavily as it has in baseball. It is not surprising to see that multiple groups of hockey fans have recreated the cup using their empty tobacco tins. We don’t encourage this one at all.

Chicago has seen a lot of the Cup in recent years. Back in 2013, the Chicago-based grilling company ManBQue celebrated the franchise’s most recent Stanley Cup victory by creating a trophy entirely out of meat. It included ground beef for the base, bacon for the bowl, and hotdogs to hold the two pieces together. Unfortunately, the meat was too foul to eat by the time all the exhibiting was finished.

A Stanley Cup... made out of bacon... you're welcome pic.twitter.com/OyLRX3EXf0

Doesn't quite look as shapely as some of the others, but it's pretty cool nonetheless

Today's press release mailbag: a Stanley Cup made out of Lego pic.twitter.com/CI2fKcIkhe

This is also a fairly easy Cup to replicate. It doesn’t take too much consumption to gather all the materials needed and lots of beer brands already provide the proper colour in their cans.

"Me and a few buddies made the Stanley Cup out of #beer cans" #hockey #sports pic.twitter.com/nbT5MW6knv