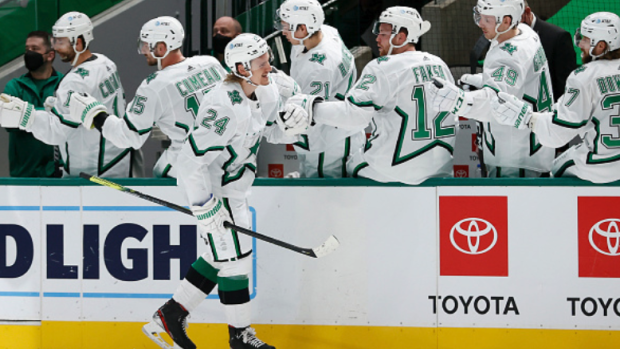 Roope Hintz was one of the best players for the Dallas Stars this season and a key piece to many fantasy hockey teams, but it felt like he was a game-time decision every single night this past year.

Roope Hintz will essentially be a game-time decision for the rest of the season. That’s the situation he’s in. https://t.co/rNmORWi6zV

With the Stars’ season officially over, we now know exactly what kind of injury Hintz dealt with this season and we honestly have no idea how he didn’t land on the IR.

Roope Hintz's groin injury was officially described as "a small chunk of bone attached to the adductor pulled away where the adductor tendon attaches to the pelvis area," Jim Nill said.

The 24-year-old only played in 41 of the 56 games this season due to lingering injuries, but he still set career-highs in assists (28) and points (43) and finished third on the team in scoring.

Per GM Jim Nill, Roope Hintz will undergo offseason surgery to repair a left adductor avulsion tendon injury and is expected to be recovered in time for training camp. pic.twitter.com/ky379nk2o9

Jim Nill said Roope Hintz will have surgery in New York on Wednesday. The Stars expect a 3 to 4 month recovery timeline, and for him to be ready for training camp.

The Stars had injuries from last year carry over to this year as they went nearly all season without Tyler Seguin, went all year without a start from Ben Bishop, and only got 11 games from Alex Radulov.