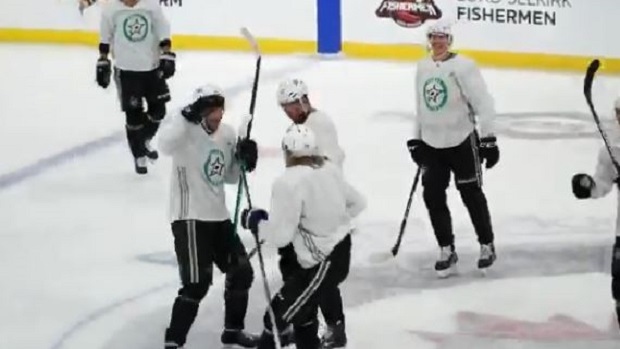 The Dallas Stars got off to one of their worst starts in franchise history this season, but they went on an absolute tear from October 19 to November 25 as they won 14 of 16 games during that span.

However, the Stars currently find themselves on a three-game losing skid heading into Tuesday’s tilt with the Winnipeg Jets, but after everything they went through earlier this season they know that there’s no need to hit the panic button. Instead, Jim Montgomery lightened things up on Monday and left everything up to the players as they had Team North America go up against Team Europe in 3-on-3.

The guys had some fun at practice today with a game of 3-on-3 between players from North America and Europe!

Check out some highlights as Team Europe took home the W. #GoStars pic.twitter.com/ISd5Pu2tb7

Anton Khudobin in goal in Tuesday vs. Winnipeg.

Fun practice day today. No coaches on the ice. Team North America vs. Team Europe in 3 on 3. Team Europe won.

Following the practice, coach Montgomery spoke about his decision to turn Monday’s practice into a scrimmage and mentioned that it was a reminder to the players to just be kids again.

"Sometimes you just need to be a kid again."

Monty talks about the team's fun practice, plus much more today from Winnipeg. #GoStars pic.twitter.com/xMBuerG0UD

The Stars have a home and home series with the Jets this week starting in Winnipeg on Tuesday and concluding in Dallas on Thursday.