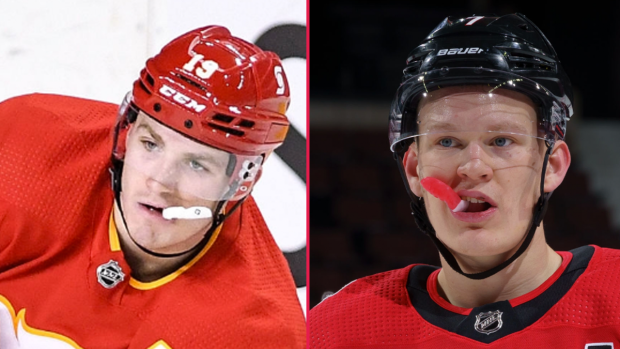 Matthew and Brady Tkachuk are definitely different. The mixture of pest and skilled forward is pretty rare around the NHL, and you could argue that each brother’s best comparison is… well… the other brother.

They’re gritty, they’ll fight, they’ll score, they’ll annoy… they’re the sort of player you love to have on your team, and you hate to play against.

Another similarity between the two is the way they abuse their mouthguards. Similar to how Steph Curry does in the NBA, or James van Riemsdyk and Patrick Kane do in the NHL, the Tkachuk brothers can’t seem to keep their mouthguard in their mouth. They’re constantly chewing on the hanging piece of mouth-wear from the whole world to see.

Recently, former NHLer and Matt and Brady’s dad Keith Tkachuk joined Ian Mendes and Hailey Salvian on The Athletic Hockey Show podcast to discuss the brother’s upcoming meetings. The Ottawa Senators and Calgary Flames play each other five time in the span of a week and a half beginning February 25th, but one subject unrelated to the upcoming games provided a particularly entertaining answer.

Poor Chantel has to watch her sons constantly put their teeth at risk playing a game known for taking pearly white casualties. Keith seems to have accepted that his kid’s maybe sporting a “hockey smile” at some point, but he’s pretty clear about who will be picking up the dental bill. It will NOT be him.

Is it possible that the two Tkachuk brothers actually knock each other’s teeth out? We’re tuning in on February 25th, that’s for sure.