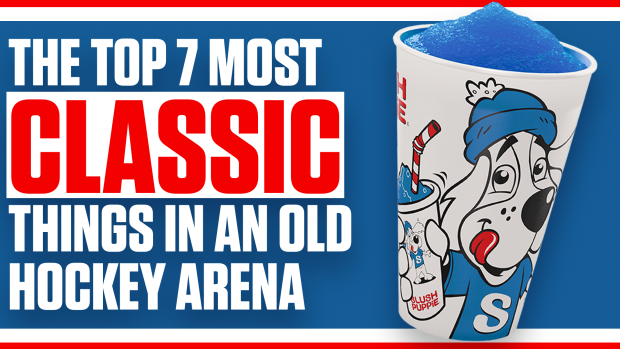 most classic things in an old barn

Just because something is new doesn’t necessarily mean that it's better, and there’s something about an old barn that just makes us feel a certain type of way! Maybe it’s the nostalgia we get from growing up in them or maybe it’s just the aesthetic. Regardless, there are certain things that you’ll find in every run-down arena and, while it can be tough at times, these things are the reason why old arenas are so stuffed full of nostalgia.

If the arena isn’t as cold inside as it is outside in Canada during the winter then it doesn’t fit the stereotype! It has to be the type of arena where it hurts to put your equipment on because it’s -20 degrees in the rink. It’s also the type where your parent’s toes are frozen after the first period from watching you in the stands.

This may sound crazy to those that didn't grow up in old arenas, but the freezing cold temperatures is (weirdly) a good thing.

The type of fence that players hate but everyone else loves. No one wants to get hit into it but the look of it alone is just beautiful!

Every old arena has the same distinct smell. We’re not really sure how to describe it but we’re sure you know what we’re talking about. Think Diesel fumes mixed with fresh ice and old wood.

If you don’t have to get your skates sharpened immediately after 60 minutes on it, it’s not that old! While 'horrible ice' doesn't sound like a good thing, fighting through the old barn sheets of ice is a quick way to build a hockey player's character.

Wooden stands
The stands are usually awkward, tiny and horribly made. Careful when you’re sitting down, you don’t want to get a splinter! Thankfully there’s rink heaters above you; even though they usually don’t do much. Pure Canadiana, no?

Small dressing rooms
By small, we mean your entire team’s bags are all touching and you can only see 10% of the dressing room’s floor. Your sticks are probably in a random corner piled up or right beside wherever you decide to get change. Also, what’s having your own hook? You’re lucky if you even get one.

Slush puppies
Whoever’s idea it was to sell this freezing cold drink in a hockey arena is a pure genius. Does it make sense? No, but the two go together so perfectly! Who cares how cold the arena is? We could never say no to a slush puppy. The feeling of having one of these drinks after a game or practice is truly a feeling like no other.