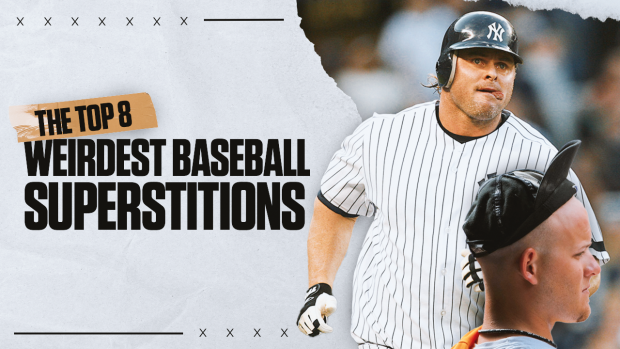 If you’re a fan of The Office, then you remember one of Michael Scott’s most famous lines within the series.

“I’m not superstitious, but I am a little stitious.”

Well, that quote definitely applies to baseball players and some of the bizarre superstitions they've developed over the league’s lengthy history. Of course, we have "never speaking about a no-hitter" and "never leaving a pitcher alone in the dugout", but there are just so many absolutely out-of-this-world rituals that we need to highlight.

So we thought we’d rank some of the players or teams with the strangest and most mind-blowing rituals.

We’re pretty sure Stevie Wonder wrote his hit song Very Superstitious solely for Wendell because this guy was absolutely off the wall and we LOVED it. He didn’t have just one weird habit, no, no, this guy had more than we can count on one hand.

He even sported the number 99 which has to be the most superstitious number within the game, right?

Our guy Swindell can place the “grosses habit” trophy beside his 2001 World Series win with the Diamondbacks because my goodness, this guy takes the cake for making us want to not eat for the rest of the day.

Normally a player would chew on something like gum or even the King of Superstitions Wendell chewed up a storm with black licorice. But this pitcher would opt for biting off the tip of his fingernails and would leave the fingernail lodged in his mouth for the remainder of his time on the mound.

This superstition is absolutely electric. Truly if you were looking for something to make you question how your day is going, just get ready for this incredibly insane ritual.

Look, we get it, hitters can tend to get into a slump from time to time and it seems almost impossible to get out of it. It happens to the best of us.

But opting for a golden thong has never crossed our minds and hey, maybe the reason we aren’t major league players is that we never picked up on this bizarre ritual.

What makes it so much weirder is that Giambi’s teammates were able to use the thong as well for anytime they found themselves in a slump. So yeah, Derek Jeter has worn this golden thong before.

Just guys being dudes, love to see it.

Right off the bat, we need to acknowledge that the former Astros pitcher was an absolute rockstar and had a very wholesome ritual that we respect even to this day.

Kerfeld rocked a very lucky Jetsons t-shirt underneath his uniform for the sole reason that the Jetsons’ dog was named Astro on the show and he was a part of the Astros.

Yeah don’t worry about us, we’re just crying because this is the sweetest thing we’ve heard all day.

Well if you thought you were going to absolutely yack because of a ritual and Swindell’s didn’t quite get you feeling wheezy, we can almost promise this next one will.

Instead of opting for batting gloves like maybe the rest of the league and the baseball community as a whole, Moises Alou decided to go with the completely inhumane practice of urinating on his hands to keep them tough and callus-free.

This ritual definitely would not fly today especially with the league’s current health and safety protocols and we’re actually just FINE with that.

Okay at this point we are begging players to please adopt healthier superstitions. At least for this one, it’s less gross but still definitely would not fly in the current season.

Between pitches, Puig would decide to lick his bat and his weird quirk. Did his bats taste like candy? Popcorn? We’re not sure but hey not the strangest ritual within this list so we can respect it.

Just like Turk Wendell, other ballplayers carry a lengthy list of rituals, and one of those people was Wade Boggs.

Ate chicken for every pregame meal and was even dubbed “Chicken Man” amongst his peers
Drew the Hebrew word “Chai” meaning life into the dirt before every at-bat
Would wake up at the same time every day
Would run sprints at 7:17 PM

This guy was definitely wild, but his most wild feat has to be his legendary flight from Boston to Los Angeles that involved 107 beers.

Last but certainly not least, we have Mr. October himself and his hilarious batting helmet superstition. Look, we get it. Sometimes you have that lucky piece of equipment you don't want to give up on, even if it means wearing your batting gloves that are hanging on by a thread.

When Jackson went from the Yankees to the Angels, he was not giving up his batting helmet that had no ear covering and resembled a construction worker's hard hat, even if it had the Yankees logo.

So they painted the Angels logo over the top of the Yanks and Reggie was absolutely set! With how things turned out for the Hall of Famer, we’re pretty positive this superstition played out just right.

And there we have it, folks, some of the most bizarre superstitions and rituals to ever grace America’s Pastime.

If you can think of any others we may have missed, let us know!