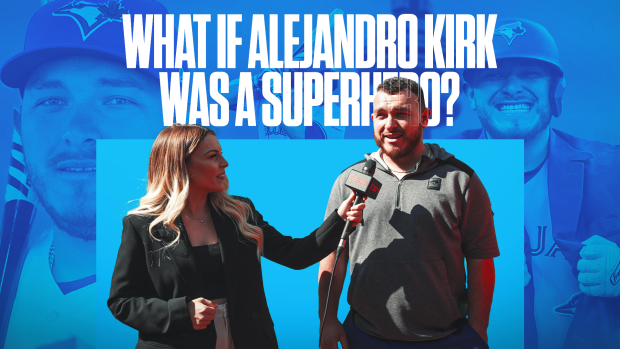 What would Alejandro Kirk's powers be?

Guys, what an absolutely electric season Alejandro Kirk (.320 BA/.413 OBP/.933 OPS) has been having! The Blue Jays catcher has not only taken Jays fans by storm, but the entire league!

DOMINATING the All Star voting for catchers, Kirk currently (at the time of this article) leads New York Yankees’ Jose Trevino by 1.1 MILLION votes and has pretty much secured the starting catcher role at the game.

Kirk is essentially a superhero on and off the diamond. He’s honestly just the whole package. Though we wanted to get down into the more pressing questions.

BarDown’s own Jordan Cicchelli spoke to Captain Kirk himself along with some of his teammates to find out what his superpowers would be, who on the Jays would be his sidekick, and what his Kyptonite would be.

Check out the hilarious interview!

About if Captain Kirk was a superhero? 🦸‍♂️@jordancicchelli speaks with Alejandro Kirk along with his Jays teammates to find out all about his superpowers. pic.twitter.com/cSxaxmWFE3