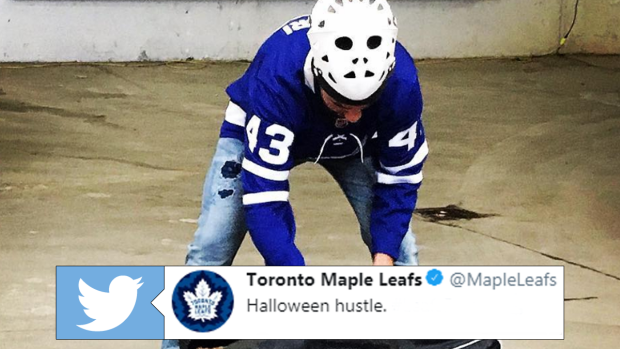 It’s Halloween, and you know what that means!

- NHL hockey players showing off their inner child by dressing up in whacky and wild costumes in celebration of Halloween.

We’ve heard from just about everyone around the NHL so far, but the Toronto Maple Leafs were oddly quiet in the days building up to Halloween. While most teams held their parties over the weekend or on an off day, the Buds waited right up until the 31st to start letting content emerge.

So far we have costumes from Josh Leivo and Nazem Kadri:

Happy Halloween 🎃 #yabadabado This year we went as “The Flintstones “ pic.twitter.com/4spYOjFSTT

The time freddy and I switched roles and he didn’t even stand a chance. Happy Halloween 👻

Fred Flintstone and “Freddy” (even though it’s a Jason mask, but according to Kadri he’s Freddy) are pretty good, but the best piece of entertainment to come out of the Leafs is this awesome video of an inflatable Carlton the Bear scaring the bejeepers out of Leafs players, in particular Auston Matthews.

Bearanormal Activity.@CarltonTheBear served up some scares to get the Leafs in the #Halloween spirit.

Have a safe and happy Halloween! #LeafsForever pic.twitter.com/Z7FF5cHrSk

We’re sure more content will emerge, after all they did have to focus on their jobs at least a little today…