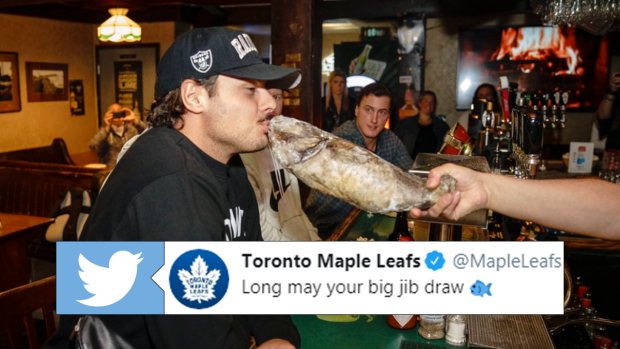 Training camp has officially arrived as the NHL season draws closer. While most fans would like to hurry the process along and fast-forward through training camp and the preseason, there are reasons to stop and appreciate the activities ahead of regular season puck drop.

This year for the Toronto Maple Leafs, it’s some of the Buds players officially being “screeched in”.

Welcome to the Royal Order of Newfoundland Screechers, b’ys! pic.twitter.com/5ixMMwCJ8U

If you’ve never been to Newfoundland, you may be wondering to yourself “………………….what the heck?” That is an understandable response, as kissing a fish doesn’t seem like regular preseason activities.

Essentially there are three steps to officially being “screeched in”:

Take a shot of “screech” – a high alcohol spirit which Newfoundland is known for.
When asked “Are ye a screecher?” or “Is you a Newfoundlander?”, you must recite “Indeed I is, me ol’ cock! And long may yer big jib draw!” which essentially means “Yes I am, my old friend, and may your sails always catch wind”.
Finally, and most photographically, you must kiss a cod fish.

Maybe it’s good luck for the boys? Only time will tell.

Tyson was all in that fish lol

you guys are officially honorary Newfoundlanders! Long may your big jib draw 💙 #LeafsForever

Making a wish for the season?😉 Good luck TML gang! Newfoundland is a friendliest place on Earth, memories last forever!👍