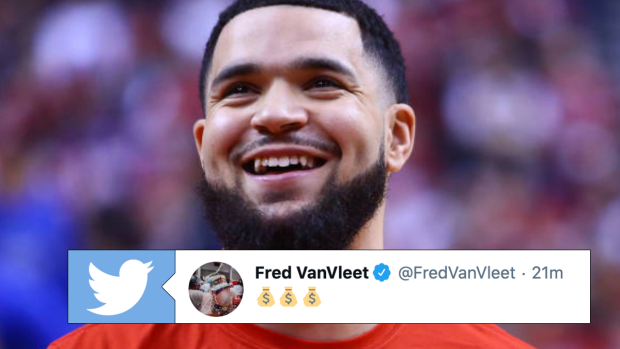 Fred VanVleet has returned to Toronto, after what seemed to be forever, the Point Guard finally made his decision and returned to the Raptors on a 4 year $85 million dollar deal.

Fred VanVleet is back with the Raptors per @ShamsCharania pic.twitter.com/CnOdhEG94r

VanVleet had Raptors fans nervous after making comments that he was chasing the bag this offseason.

Fred VanVleet: "I'm trying to get paid, man. I don't have to tell people that I value winning...I won a championship. And now it's time to cash out."

After he made his decision, fans and friends alike (including Kyle Lowry) had some praise to throw towards the undrafted guard.

Kyle Lowry with some kind words for Fred VanVleet pic.twitter.com/3b4OkT6ydV

Fred VanVleet after re-signing with the Raptors pic.twitter.com/R3htBT6n3D

Fred VanVleet made $19.9 million over his first 4 seasons in the NBA.

Bet on yourself, kids.

VanVleet himself isn’t a man of many words, but he had this to say on Twitter.

Yes indeed Fred, bet on yourself!