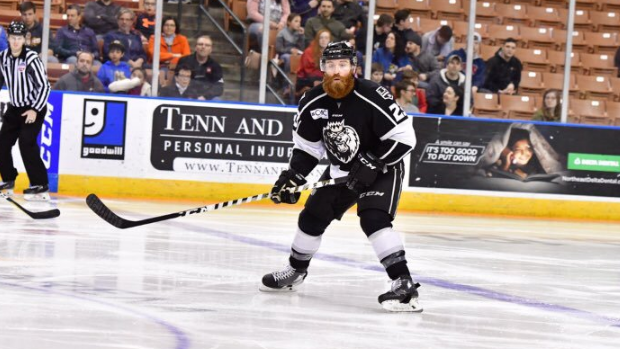 The Utica Comets -- the Vancouver Canucks' AHL affiliate -- have signed a minor leaguer to a PTO (professional tryout offer), and he might just possess one of the best names you could ever imagine a hockey player to have.

He's not a prototypical offensive defenceman, but Saucerman is definitely capable of whipping up some sweet sauce, as he registered 12 points (four goals, eight assists) in 22 games with the ECHL's Manchester Monarchs and Idaho Steelheads. He's also totaled five career assists in 17 AHL games with Providence Bruins and Springfield Thunderbirds.

The Legend of Saucerman doesn’t end there, though. The Colorado Springs, CO product has a tremendous beard and even went as Gritty for Halloween.

Among Colton Saucerman’s greatest achievements: He dressed up as @GrittyNHL and it is incredible.
(Photo via his Instagram) pic.twitter.com/CU5tGdzAWm

The Comets are currently without Canucks prospects Olli Juolevi, Jalen Chatfield and Ashton Sautner due to injury, meaning it could be time to release the Saucerman man.

If he gets on a mini hot-streak, watch out for the hot Saucerman. Sweet sauce(r), man!

I have a new favorite minor league hockey player and his name is Colton Saucerman pic.twitter.com/asSoh5mW6V