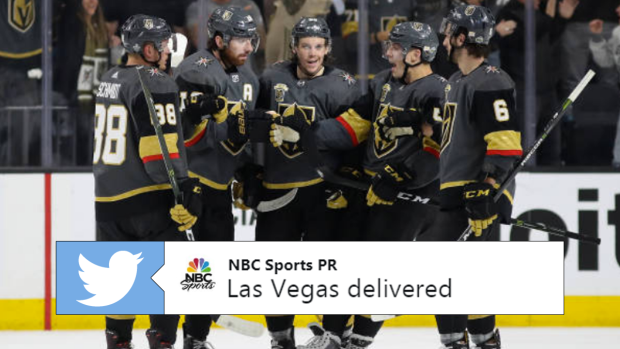 When it was announced that Vegas would be the NHL’s 31st city, the news was met with quite the backlash. People argued that Quebec City or Seattle were much more deserving of an NHL franchise, and people also worried that a warm-weather climate in a city that could be described as transient could lead to a lack of a consistent fan base.

Of course part of the reason why they’ve become such a prominent hockey city is because of their surprising success on the ice, leading to a truly unexpected 109-point season, but that’s not the only reason. Vegas has delivered an atmosphere that reflects their team in a way that could be compared to how their city is thought of in the country – the fun getaway, party experience. On top of that, their social media team has certainly left a lasting footprint by picking fights with other teams, as well as using interesting techniques like obscure movie references to peak their following’s interest.

They are also delivering on television ratings, as NBC Sports reports that they are actually out here raising the bar even higher.

Las Vegas delivered 11.1 local market rating for @GoldenKnights Gm1, best-ever for market on @NBCSN or local carrier. Gm1 did a 19 share, so nearly 1 in every 5 TVs that were on in market were watching @GoldenKnights every minute. @NBCSN was No1 network in market during game.

Pretty impressive for an expansion team that was told by some they would sink faster than a lead zeppelin (yes, we are aware that is not how the band spells it).

While it will be interesting to see how the market develops as the novelty wears off, it is certainly worth a healthy hat tip to the team and it’s owners.

Plus vegas has about 3 billion tv's just on the strip itself . Probably helps a bit ..

I think its amazing and a credit to McPhee and Galant relentless in their attack. They do it for 60 minutes honestly they very well could win the cup

Either you love us or you hate us! Either way it doesn’t matter! We know who we are and we know what our team and city is made of! #vegasstrong #vegasgoldenknights