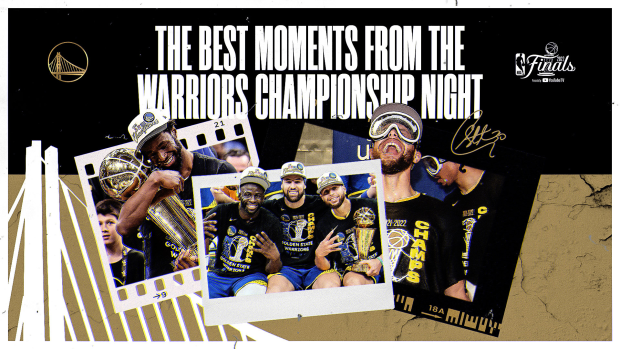 The Golden State Warriors are once again atop the basketball world after a 6-game Finals victory over the Boston Celtics. This time, there was no Kevin Durant around, a fact that a lot of fans saw as being the difference maker between a really good team and a Championship team.

No Durant, no problem. That’s what made this run feel particularly special for a lot of the Warriors players, even given that they won one before Durant’s arrival as well.

As the clock stuck zero and the Warriors were official champs once again, a barrage of special moments came flooding in. Here are some of our favourites from a special night in Boston, in the Bay, and beyond.

Andrew Wiggins, a former 1st overall pick who has had a career full of adversity for underachieving, showed up for the Warriors this year. When playoffs rolled around, he shone even brighter, notably leading the way for Golden State in a pivotal Game 5 win.

Wait for it… 🇨🇦 pic.twitter.com/cH6GRZ6aD4

This moment between Andrew Wiggins and Jordan Poole 😭

Of course, it wasn’t all so wholesome. Klay Thompson had a bit of a bone to pick, seemingly with Memphis Grizzlies young big man Jaren Jackson Jr.

Klay went in on JJJ… pic.twitter.com/bdGGseyuJM

The night was a huge one for Steph Curry as well, who has been an integral part of the Warriors dynasty yet has never come away with Finals MVP… until Thursday.

Steph's teammates gave him their own MVP chants when he got his Finals MVP 🏆 pic.twitter.com/uagAqizgBC

The face of the Warriors was also flashing a signature move during these playoffs.

Steph's signature in the playoffs 😴 pic.twitter.com/8nHx22QsNP

Along for the ride with Steph has been the scrappy Draymond Green, who could fairly be described as the Warriors energy man. The trash-talking Michigan native is constantly in the spotlight – often so that fans, analysts, or other players can take their shots – but in the end, it’s Draymond on top again.

"WHAT THEY GONNA SAY NOW?"

The Warriors chanted “F--- Draymond” in the locker room 😭

Well we’re all amazed by the consistent dominance that has been the Golden State Warriors, would any of us really be that surprised if they ran it back and won it all again next year?