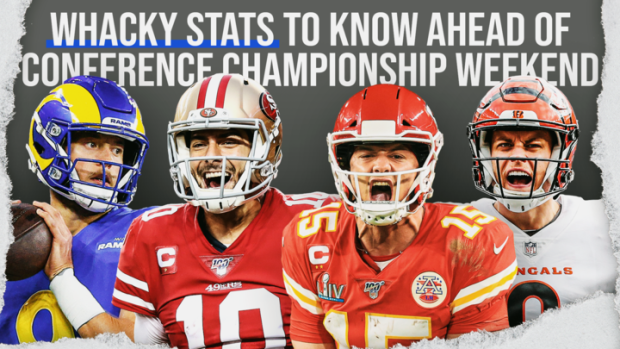 The NFL, like most sports leagues, has increasingly involved the use of stats for more than just analysis. These days, stats are used as a way of upping entertainment value and further developing story lines.

As focus has become more and more stat-centric, some of the stats that have emerged are pretty fun. Even just this year’s Conference Championship weekend alone has brought with it a number of wild and whacky stats.

With the help of TSN stat guy Kevin Gibson, we’ve isolated some of the whackier stats heading into what we hope to be a very entertaining couple of games.

Joe Burrow is fantastic, and he’s certainly proving that he’s got a promising career ahead of him. While he wasn’t necessarily expected to have the Cincinnati Bengals where they currently are, the true whackiness is about how it has literally never happened.

On Sunday, Joe Burrow will become the first starting QB ever that was selected as the number 1 pick overall to play in a conference championship game within his first two seasons.

The Bengals are 2-0 in the AFC Championship, but they’ve never won three playoff games in a row

Despite their AFC Championship triumphs in 1981 (over the Chargers) and 1988 (over the Bills), the Bengals have never won three straight playoff games while also never having won a Super Bowl.

They are one of just two teams to be undefeated in Conference Championship games, along with the New York Giants.

If you gave an NFL team the choice to have their quarterback lead the league in regular season passing yards, it would be a no-brainer… right?

Well, not so fast. It seems there is some bad juju that comes with the accomplishment. Quarterbacks that lead the league in passing during the regular season have gone a combined 0-5 in the Super Bowl. With regular season passing leader Tom Brady falling to the Los Angeles Rams last weekend, the year’s Conference Championship weekend marks the continuation of the trend.

Tom Brady led the NFL with 4,577 passing yards this season

Mahomes has as many playoff wins as the other three quarterbacks combined, and half the playoff losses.

Patrick Mahomes is entering his 4th consecutive Conference Championship, becoming just the 6th quarterback all-time to do that. Being only 26 years old, that subsequently means that he’s got a pretty good playoff record.

Burrow was sacked an outrageous 62 times this year, which is 7 sacks more than the next highest sack total on a Conference Championship bound quarterback (Jay Cutler was sacked 55 times in 2010.

While the San Francisco 49ers have been relatively successful in playoffs with Jimmy G under centre, it hasn’t been because of Jimmy G lighting it up in the passing game. In fact, only one other quarterback has fewer passing yards per playoff win than Garappolo (127.8) with at least four playoff wins.

That quarterback would be Craig Morton, who averaged 124.6 passing yards over his five career playoff wins.

If the Niners beat the Rams this weekend, they will become just the 3rd 6-seed to make it to the Super Bowl

Everyone loves a good underdog story. To make this stat even better, the other two teams (the 2005 Pittsburgh Steelers and the 2010 Green Bay Packers) both won the Super Bowl that year.

The Niners are also just the 8th team to make a Conference Championship after holding a losing record through nine weeks (4-5). Of the other seven teams, only the 1979 Rams made it to the Super Bowl (where they then lost).

The Niners have been embarking on an unprecedented Cinderella story

After starting the season with a 4-5 record, the odds of San Fran making the Super Bowl was 0.4%. Those odds have now improved to 40.6%.

The Niners are also the 1st team in NFL history to win three straight road games against 12-win teams, dating back to Week 18’s victory over the Rams.

Stats surrounding Matt Stafford’s time with the Lions continue to be a white elephant in the NFL. While he was undoubtedly a productive passer while playing with Detroit, the Lions were never able to field a team even close to contention.

Only Philip Rivers has more passing touchdowns in the regular season (421) while never having started a Super Bowl. Stafford’s looking to get himself off that list, in which he sits 2nd at (323). Next up are Carson Palmer (294) and Warren Moon (291).