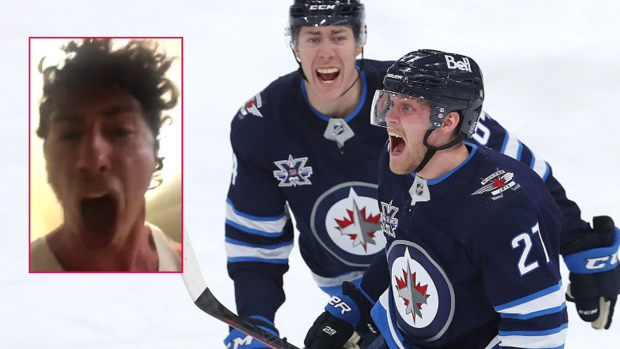 When the Winnipeg Jets scored in OT to win Game 2 by a score of 1-0, the hockey world was lit on fire. It put them up 2-0 in the a series many had projected to be a clean Edmonton Oilers sweep.

…and then came along Game 3.

The Edmonton Oilers went up early and eventually held a 4-1 lead with only half a period to go. There was a bit of a feeling that we may be witnessing the TSN turning point of the series, as the Oilers simply looked like they had found themselves after two dud games.

Mathieu Perreault scored to make it 4-2, and then a goal from Blake Wheeler brought it to within one. Seconds later, Josh Morrisey tied the game.

Yep. The momentum had fully swung to Winnipeg, and it didn’t take too long for the Jets to score in overtime. Pure glee from Jets fans, absolute devastation from Oilers fans.

Live look at the Jets down 4-1 in the third: pic.twitter.com/E8wtg3cx00

Jets coach Paul Maurice called Winnipeg's comeback "the biggest I've been behind the bench for."

unless you’re the oilers

then it’s a drag

“And that kids is why it’s so hard being an Oilers fan.” pic.twitter.com/52XnZFnWzM

How many unanswered goals did the Oilers allow? pic.twitter.com/MXpITkiGxI

Me, a Leafs fan, watching the Oilers blow a 4-1 lead with less than 10 mins left in the 3rd pic.twitter.com/XfLvbicsnN

Get hyped, Winnipeg. Your #NHLJets just pulled off the unlikeliest 4-1 comeback to take a 3-0 lead in the 1st round.

What could the Oilers possibly have left tomorrow?