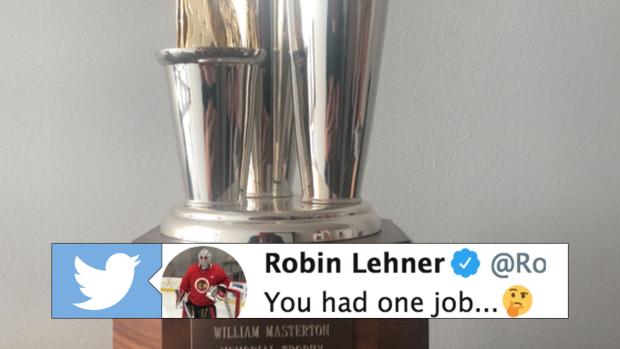 Robin Lehner has gone through many personal and professional highs and lows over the course of his NHL career, and he's been open about all of it in order to help others struggling with mental health issues.

In 2019, Lehner had a career-year on Long Island and was awarded the Bill Masterton Memorial Trophy as the player who best exemplified perseverance, sportsmanship, and dedication to hockey.  There's just one problem with the trophy that was sent to Lehner, it has the wrong team engraved on it.

You had one job...🤔 pic.twitter.com/fmzYQWKuFf

If Lehner's new team was on the trophy (the Chicago Blackhawks), it would have been more understandable than the New York Rangers being the team engraved.

I don’t even know what to say

A mistake like this added a bit of fuel to the always burning fire that is the battle of New York between the Islanders and Rangers.  Lias Andersson also ignited a few more flames with his response to the tweet.

Mistakes are made in all walks of life, but based on the responses on social media, any other team aside from the Rangers being on that trophy would have sufficed.