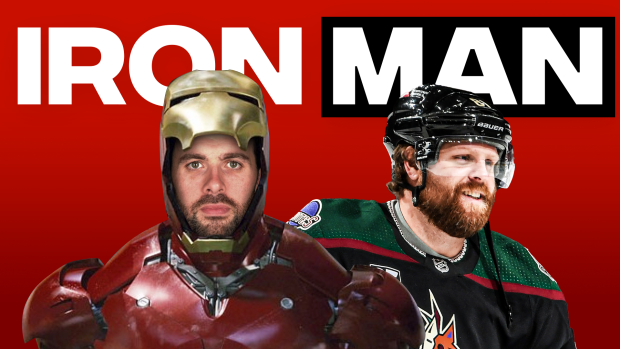 Iron Man records are interesting. They don’t require a lot of skill (other than enough to avoid healthy scratches) like most NHL records. It requires durability and/or toughness.

Regardless, they’re still very impressive. Especially when they’re as ridiculously long as Keith Yandle’s new record that he broke.

Yandle suited up for the Philadelphia Flyers in Tuesday’s game against the New York Islanders. The game marked Yandle’s 965th consecutive game played, officially surpassing Doug Jarvis’ mark of 964 consecutive games played. The record had been standing since Jarvis’ streak was officially halted on October 11th, 1987, when he was sat for a game.

To show just how impressive the streak is, look no further than the Top 10 remaining current active Iron Man streaks.

What a ridiculously steep drop off. In fact, there are only six players within 700 games of the record!

Not only that, some of these players certainly don’t have a hope of breaking it, like Patrick Marleau.

While Marleau’s streak is still technically active because he has yet to retire, the likeliness of the 42-year-old making it onto an NHL roster for 55 more scratch-less games is razor thin.

While it’s not impossible for Brent Burns, it’s highly unlikely for the aging defenceman. Even if he plays the remaining 40 games of the Sharks’ season, he would then need to play three more full 82-game seasons and then an additional 40 games of the season after that. Burns turns 37 in March.

Similarly, Anze Kopitar and Ryan Suter likely just don’t have enough time left. While the 34 and 37-year-olds, respectively, may have some play left, their sub-300 Iron Man streaks just aren’t close enough to feasibly be able to close the gap.

While guys like Leon Draisaitl, Kyle Connor, and Clayton Keller have a shot based on the fact that they’re all 26 years old or younger, they’ll need to approximately triple their current already-impressive Iron Man streaks for a shot at Yandle’s current mark.

Not to mention, Yandle’s streak will just keep growing indefinitely. There’s basically one man with a feasible possibility at becoming the new Iron Man…

And his name is Phil.

It's August 14th and two-time Stanley Cup Champion Phil Kessel is eating hot dogs out of the Stanley Cup. pic.twitter.com/39FAF1MPjH