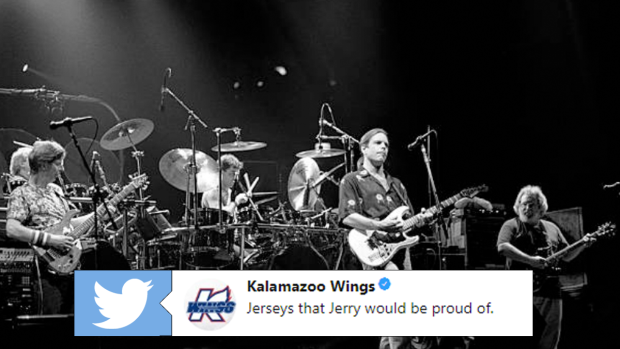 Next stop for Captain America? Hitting the ice in Atlanta on Saturday night as the @atlgladiators host @fl_everblades for @marvel Super Hero Night!

.@Marvel and @ECHL have joined forces to create this jersey for our 'Marvel Super Hero Night' on Saturday, November 4. #MarvelSuperHeroNight pic.twitter.com/CiEM4Wf3GA

In the #flyeaglesfly x #BrotherlyLove mood over at the Complex. 😬

ICYMI... we will be wearing a different jersey each period for our Saturday, January 27th salute to the 25th Anniversary of the Mighty Ducks movies. Jerseys will be auctioned off to benefit the Cincinnati Cyclones Foundation following the game! #Quack pic.twitter.com/JS75RhXTgU

We’ve even seen jerseys that cross the boundaries of sport

Tune up yer banjos- we're in #Riders country. Inspired by their retro jerseys (which they should wear full-time) #CFL #CFLUniformMonitor pic.twitter.com/cLJJ67Yli9

The #AFCChampionship reimagined as the Eastern Conference Final. What do you think? 🤔#ConceptJersey . (Design via @bonezgt )

The Kalamazoo Wings are the team in charge of donning these unique jerseys. On Saturday night the Wings will take on the Indy Fuel. While the two ECHL Central Division rivals will be hoping to move up in the standings, these jerseys are sure to add an extra dynamic to the game.

Jerseys that Jerry would be proud of.@GratefulDead night is this Saturday! pic.twitter.com/aN6UMLZ0eZ

The jerseys are a part of “Grateful Dead” night, and features the symbol from the 70’s band’s Steal Your Face live double album. It also features other recognizable Grateful Dead symbols including roses outlining team logo and the dancing bears around the waist.

Believe it or not, this is not the first time hockey jerseys have been themed around the beloved classic rock group.

Evidently The Grateful Dead had a hockey team... Who knew? pic.twitter.com/k2MrVBjpLK

The Grateful Dead jerseys are cool, but it's certainly not a one-off for the Wings. They've been known to wear some of the craziest themed jerseys around the league.

You don't wanna mess with this Flying V.

We're celebrating 25 years of "The Mighty Ducks" tomorrow night against Toledo. These one-of-a-kind jerseys will be auctioned off after the game for Family and Children Services in Kalamazoo. pic.twitter.com/saWWzc2HkX

The Grateful Dead jerseys are to be auctioned off following the game.