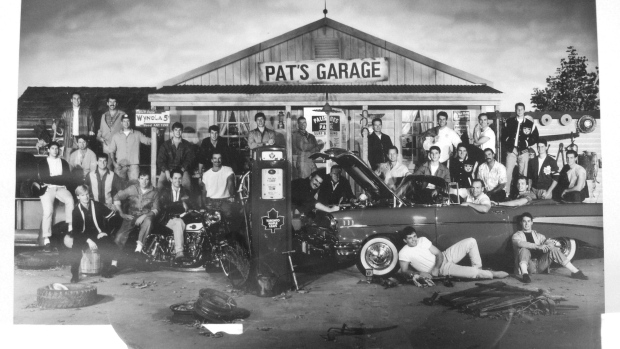 Hung up on the wall of many sports fans basements across Ontario, are these retro Toronto Maple Leafs photoshoot posters.

A little bit of a nostalgic trip but honestly, teams just don’t do it like the Leafs did it back in the 90's.

Between Doug Gilmour riding a chopper, to the rest of the ‘93 roster looking like they are straight out of the Peaky Blinders, there’s a lot to take in.

We have Pat himself along with assistant coaches Mike Kitchen and Mike Murphy under the hood and the symbolism here is just something special. If you fix your focus over to the driver’s seat, you can see Wendel Clark living his best life, arm chilling out the window, hand over the wheel just straight breezing.

Looking just over Clark’s shoulder you can see Grant Fuhr just straight face mugging in what seems to be a tropical shirt. The Magnum P.I. Tom Selleck vibes that Fuhr is giving us is what we want to see more of! More handlebar moustaches and button-up shirts in honour of Fuhr.

There’s much more to digest with this photo but we want to save our breath for the second photo in question, we’re “going for more!”

This is also a work of art, not only within itself but for all time hockey team photos.

We just want to know the thought process of where x (the Toronto Maple Leafs, a hockey team) correlated with y (a 1920’s gang theme).

The symbolism comes back out to play as Wendell Clark can be seen to the left with boxing gloves hung over his shoulder, the mind that went into this photoshoot is just beautiful.

Somewhere we got lost after Doug Gilmour wearing a scarf and holding onto the hood of the caret, to Dave Ellett and Kenny Baumgartner sporting guns with the rest of the team. We just want to know:

1. What is going on?
2. Why are current NHL teams not doing this?

Honestly, how cool would it be if your current team release photos like this? Imagine the current Leafs roster dressed up in some sort of blast from the past. Some William Nylander disco vibes anyone? We want to see Phil Kessel on a motorcycle and Alex Ovechkin laying across a hood of a car. We want Connor McDavid dressed like a 50’s greaser or Mitch Marner dressed like he’s some sort of a detective, this is the hockey content we want to see!