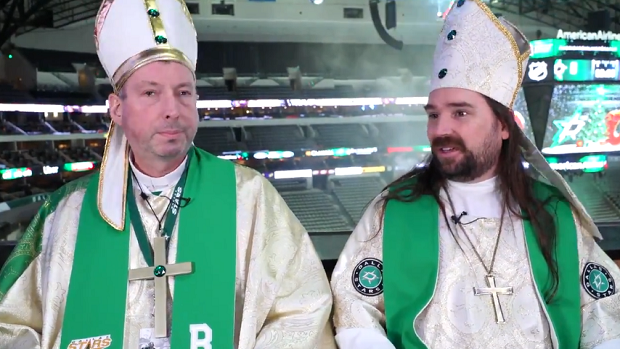 We’re all about creative hockey fans.

Hockey die-hards keep outdoing themselves with the level of dedication and creativity they bring to rinks around the nation, and we always love to see what they’re up to.

These two best pals from Dallas named Chris and Jim have an especially interesting way of showing their appreciation for the Stars’ goalie, Ben Bishop.

These two Texas hockey fans call themselves ‘Ben’s Bishops’, and their outfits are just plain wonderful.

You may have seen these guys roaming around AAC spreading the good word about Stars hockey. They call themselves, @BensBishops. pic.twitter.com/qAIvdpyP0W

The two bonded at work over their mutual love of hockey, and obviously, it had budded into something completely creative and unique. The duo was inspired by the ‘Traveling Jagrs’ , who are also a group of friends and hockey super-fans, that are well-known to dress up to each represent a different era in Jagr’s career.

This duo has become a phenomenon in the American Airlines Centre, and apparently garner a whole lot of attention on the concourse at home games.

They are some awesome dudes! Finally lucked into a pic w/them! Prolly more excited to meet them than the actual @Benbishop30! 🙃🤭💚 Love this sport!!! #GoStars #BensBishopsRule pic.twitter.com/X5aprKdcuT

Got my picture at a watch party pic.twitter.com/xRsHCVEZl7

A potential downside to these awesome costumes is the sitting behind this tandem at a game, as those bishop hats would be pretty tough to see over. Not to worry, though, as Ben’s Bishops also come equipped with short beanie-style hats to wear during the course of play.

They really have thought of everything, and hopefully, they bring the Stars’ some luck when the take on the Buffalo Sabres after ten days off on January 30th.