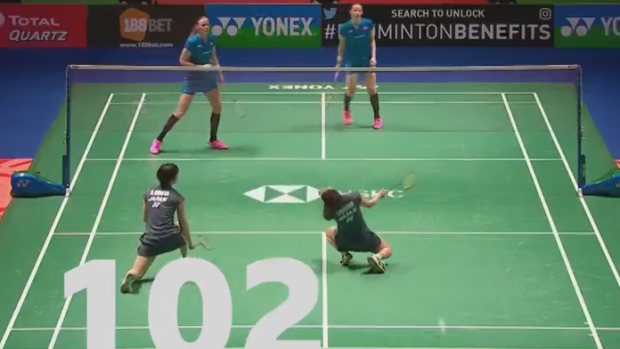 While the sport of badminton isn’t as popular in North America as it is in other countries around the world, you still have to admire and appreciate just how difficult it can be to keep that little shuttlecock off the ground.

The shuttlecock, also known as a birdie isn’t supposed to be hit 102 times in a rally, but in a women’s doubles match between Denmark and Japan, four badminton players managed to go on an incredible 102-shot rally.

Grab some popcorn and kick your feet up, because this is going to take a few seconds to watch – 90 seconds to be exact.

This is exhausting to watch... pic.twitter.com/UHSLygoMSv

The crowd’s reaction tells it all.

Hats off to Japan’s Yuki Fukushima and Sayaka Hirota, and Denmark’s Christina Pedersen and Kamilla Rytter. The Danes went on to win the set 21-18 and claimed the All England championship.

For reference, here’s the longest rally in the history of the sport.