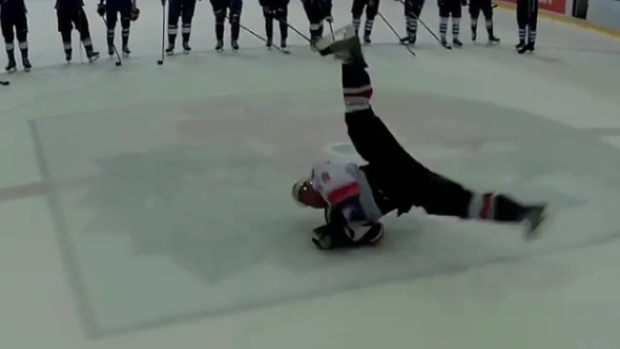 On Wednesday night, Edmonton Oilers’ superstar Connor McDavid was revealed as the EA Sports NHL 18 cover athlete. While playing with McDavid in the NHL 18 game, the centreman will probably be as close to a cheat code as a gamer can get. What type of extra moves will a person have in control of McDavid they won’t be able to pull off with other players?

While we are curious about the players’ skill level in the game, our good friend Pavel Barber suddenly has us wonder about player celebrations in NHL 18.

What would the greatest celly be in NHL 18? Well, we think we’ve found it, and will be passing it along to EA Sports.

This Latvian hockey team was finished practice, and appeared to line up for a dance battle. They quickly found the winner of the battle when one player went in and began breakdancing in full equipment, skates and all.

If this celebration were in NHL 18, we would do it after every single goal. But at the moment, we’ll continue to use the Jose Bautista bat-flip celly.