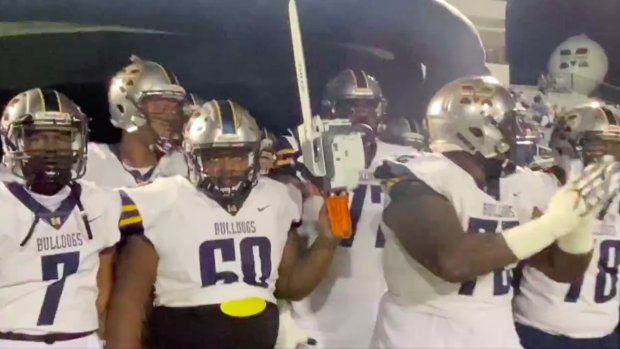 JUCO football can be a wild, wacky world at times, as you should be able to tell from the latest out of Mississippi Gulf Coast Community College.

As part their entrance onto the field, it appears that the MGCCC Bulldogs tried to bring a chainsaw out to the field with them. Honestly, in sports, you’ll see a lot of shenanigans in the name of getting the team and the home crowd fired up, so this is like a soft 7 in terms of things we’ve seen.

Still, the referees ruled against letting the players take the chainsaw on to the field, which is probably for the best. The sight of a player left standing, chainsaw in hand, is sort of unreal.

The referees at MGCCC vs Jones wouldn’t let the Bulldogs bring our their chainsaw. 😂

“Y’all can’t bring that out here”

I asked the refs about it right before the coin toss.

“One of us has been doing this 30 years and haven’t seen something like that” 😂😂😂😂 pic.twitter.com/n57bzpgZgX

It looks like the chainsaw actually has the teeth removed, so we’re glad the team made some considerations on behalf of everyone’s general safety, but it seems like a stretch to think that they would be allowed to bring a chainsaw to the field in any real context.