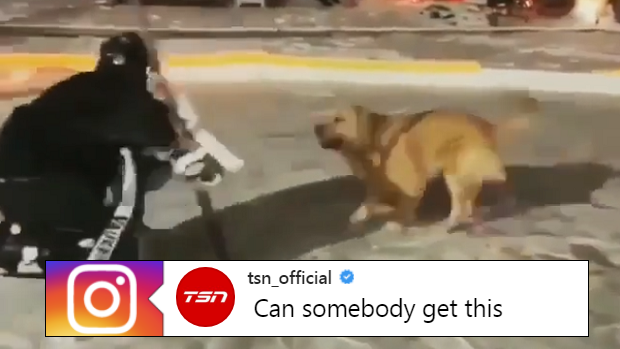 A doggy hits the ice with its owner. , Hockey_News_Schweiz

There’s nothing like a good ole’ hockey dog video to help you get through hump day.

We’ve seen dogs perform an array of tricks on the ice (usually golden retrievers) and we already have a front-runner for best animal video of 2019. This cute little doge took to the ice and this time, he hit it with a goaltender. While the netminder glided across the ice, his dog followed him move for move and it made for a pretty adorable moment.

Can somebody get this good doggy a stick already🏒🐶! . (H/T @hockey_news_schweiz)

Okay, so the goalie was sliding at a pretty remarkable pace, but can we talk about the dog for a second? It’s not easy to move across the ice that quickly… well done young pup!

This little guy is far from the only dog to make an appearance in a hockey video. The Newfoundland Growlers' ‘Pooh’ recently made his debut at the team’s practice and held his own as well. The players were absolutely loving him out there!

Pooh made his Newfoundland #Growlers practice debut today and he looked like a natural out there 🐶 ••• (🎥: @nlgrowlers)

Hockey’s isn’t the only sport that dogs are becoming a hit in these days. This pup looked like a young pele with its owners, dribbling a soccer ball at a remarkable speed and even going through the legs.

Tag a friend who would get nutmegged by this dog 😂 • (🎥: @rclivramentoreal)

If you have a dog then you should probably take it to the ODR for your next skate because it’ll probably have the time of its life. If you train it enough, perhaps it’ll turn into the next MVP!