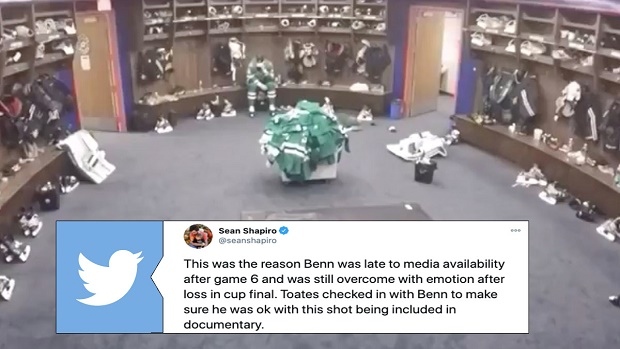 From starting the season in last place to playing for the Stanley Cup, the Dallas Stars experienced all of the highs and lows during the 2019-20 season.

They ended up coming up two wins shy of taking home hockey’s most prized possession and the entire journey was captured by their talented production team.

On Thursday, the Stars released ‘We’re Not Going Home: The 2020 Dallas Stars Playoff Run’, giving fans an all-access pass behind the scenes of their run through the playoffs.

Stars fans got to take a deeper look behind the scenes of their playoff run, but they were left with one of the most heartbreaking scenes that featured captain Jamie Benn sitting all alone in the locker room following their Game 6 loss.

Jamie Benn in the locker room after the Stars' season ends in Game 6 of the Stanley Cup Finals.

Mattias Janmark consoles him and walks out. The 31-year-old captain sits alone in an empty locker room.

Heavy moment. Says more than any amount of words could. pic.twitter.com/uHmnqnsJ2M

Benn has faced a lot of criticism the past few years because he hasn’t produced during the regular season like he used to, but he was on an entirely different level throughout the playoffs and he put the team on his back.

This was the reason Benn was late to media availability after game 6 and was still overcome with emotion after loss in cup final. Toates checked in with Benn to make sure he was ok with this shot being included in documentary. https://t.co/yB776R2jvB

We all saw Benn wear his emotions on his sleeve while speaking to the media following their Game 6 loss, and now we know how hard it truly was for him to go up and speak after losing in the Stanley Cup Final.