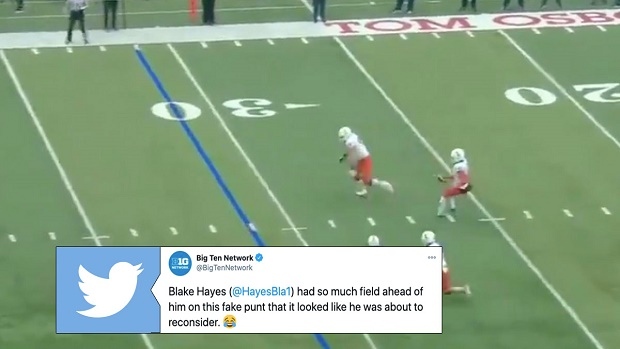 Just because you draw up a play a certain way it doesn’t mean you’re going to execute it exactly as planned, but as long as it works that’s all that really matters.

On Saturday, Illinois pulled off a fake punt against Nevada, but we can guarantee you that the way they pulled it off was not the way they drew it up in practice.

Blake Hayes (@HayesBla1) had so much field ahead of him on this fake punt that it looked like he was about to reconsider. 😂@IlliniFootball delivers one of the most unique fakes you'll ever see #ForTheBrand: pic.twitter.com/bMv8OWtmN9

Already leading 28-10 early in the second half, Illinois lined up to punt the ball away. However, Blake Hayes quickly noticed all of the open field in front of him and awkwardly decided to run it himself for the first down.

For. The. Brand. #Illini | @PatMcAfeeShow pic.twitter.com/TjSVesVc6P

Illinois went on to win the game, 41-23, for their second win of the season.