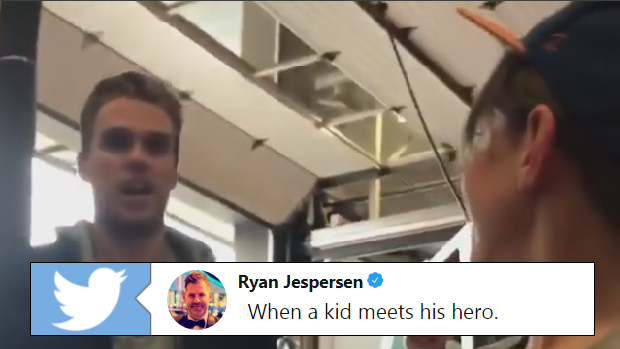 There are few things better for a young hockey fan than receiving a surprise visit from their favourite hockey player.

Connor McDavid, along with Team Canada Women’s goaltender Shannon Szabados, made a few trips around Edmonton surprising local Oilers fans. From hockey rinks to fire halls, the two made sure to spend some quality time with the young fans who adore them most.

McDavid managed to bring the best out of one particular youngster, who couldn’t believe his eyes when the captain of his favourite team walked through the doors. Get the tissues ready, because this might bring out a couple of tears.

Tag a friend who would have the same reaction after meeting #ConnorMcDavid. . (📷: Ryan Jesperen/Twitter)

It’s always heartwarming to see a fan break down after they encounter their favorourite athlete. Earlier this year, Pittsburgh Penguins icon Phil Kessel made a young girl’s night when he gave her his hockey stick in warm-ups.

A young #Penguins fan was brought to tears after Phil #Kessel made her Christmas wish come true. . . (Via r/hockey)

Despite the Oilers’ down year, it’s nice to see McDavid is still engaging with Edmonton residents. Whether it’s for community work or a reason related to the ice, Connor’s appearances in the media always seem to be pretty special.