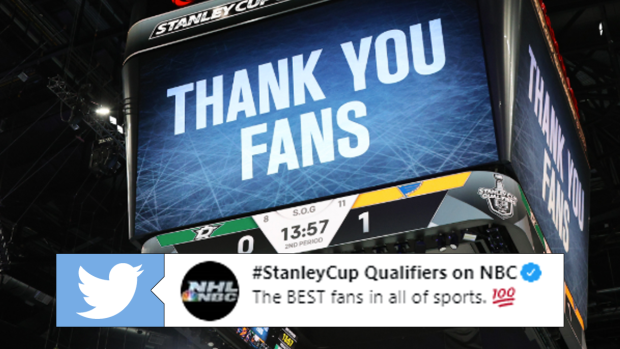 NHL Scoreboard , (via NHL on NBC)

The NHL has been making the best out of a bad situation with COVID-19 not allowing fans to take to the stands and support their teams in arena. Obviously not desirable, but it’s opened up a whole new world of dad jokes that the workers at Rogers Place in Edmonton have been taking FULL advantage of.

We’re seen them announcing the obvious attendance of 0, we’ve seen them ask fans to exit their couches safely, we’ve seen them state that concessions will remain open through the entirety of the game. Now, we’re seeing REAL FANS in the stands. Not the kind you may be thinking of though…

A HUGE SHOUTOUT to all the fans for their support during the NHL Return to Play. 😂😂#StanleyCup pic.twitter.com/knyAFkX4JT

We respect the extra effort put into this one. It's not simply designing a scoreboard graphic, someone had to actually go into the stands and plant four fans to complete the gag.