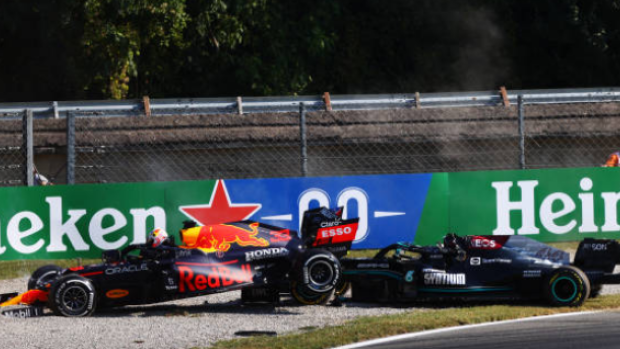 No matter how many safety instruments are in place, racing an F1 car is ALWAYS dangerous. Add in the aggressive nature of the Lewis Hamilton/Max Verstappen rivalry and it can lead to even more close calls.

A month and a half ago, we saw Lewis Hamilton clip Max Verstappen at the British Grand Prix, sending his rival barreling towards the barrier where his car was promptly wrecked. On Sunday, we saw the two meet again in another scary collision.

Racing at the Italian Grand Prix, Hamilton and Verstappen got a little too close going around a narrow corner. Verstappen appeared to hit the curb and hop up onto Hamilton’s car, with his tire actually making contact with Hamilton’s helmet.

This on-board 360 degree camera caught a wild angle of the crash.

You can see the dramatic moment where Hamilton’s head is contacted, very clearly saved by the protective “halo” built into F1 cars these days. Following the collision, Hamilton acknowledged how lucky he was that nothing worse happened.

"I'm so, so grateful that I'm still here. I feel incredibly blessed. I feel like someone was watching over me today," he said, via ESPN.

It’s called a halo for a reason.