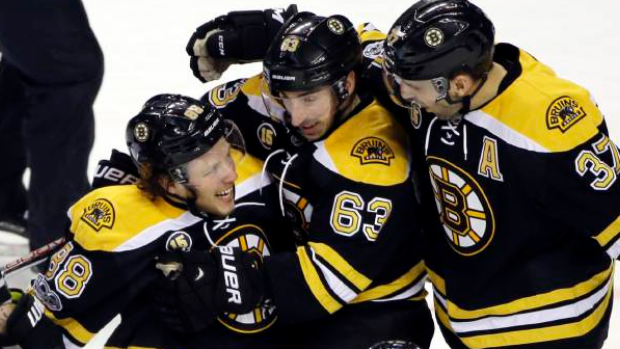 They’re one of the most dominant lines in hockey, both offensively and defensively.

The trio of Brad Marchand, Patrice Bergeron and David Pastrnak is not only an offensive juggernaut, but have also became the poster line for the analytics community as one of the most responsible units in the NHL.

As they say, numbers don’t lie. Coming into Tuesday’s game the Bruins top line hadn’t been on the ice for a 5-on-5 goal against. According to Corsica.Hockey, the unit had played 21 games together this season without being scored on.

That all changed tonight in a game against the New York Islanders when Jordan Eberle found the back of the net for his 14th of the year.

The Eberle goal is the first even strength goal allowed by the Marchand-Bergeron-Pastrnak line during this entire season. Not that it was their fault...cough, cough Carlo

So, how exactly did they respond? Like any good line would. First, they went onto the power play midway through the second, where Bergeron hunted down a puck that fell from the air and slid it in for his 12th of the year.

Marchand’s apple was the 200th of his NHL career.

To make amends with their even strength goal differential, the trio got another gino, this time coming at even strength, as Pastrnak found Marchand on a two-on-one, where he made no mistake about it and beat an outstretched Jaroslav Halak.

The team went on to defeat the Islanders 5-1 for their 16th win in their last 21 games.

As a line, Bergeron, Marchand and Pastrnak have control 60.68 percent of shot attempts whenever they've been on the ice this season. Last year, the three B's had the highest shot attempt percentage at 62.91% out of any line with a minimum of 500 minutes played together.

After all, it’s hard for teams to generate chances when they’re constantly hemmed in their own zone, and there’s no better example of that the Bruins top line.

“The best defence is a good offence,” as they say.

Combined with Tuuka Rask’s hot play of late, the Bruins look destined to return to the postseason, sitting second in the Atlantic with a two-point cushion over the third-place Maple Leafs, with three games in hand.