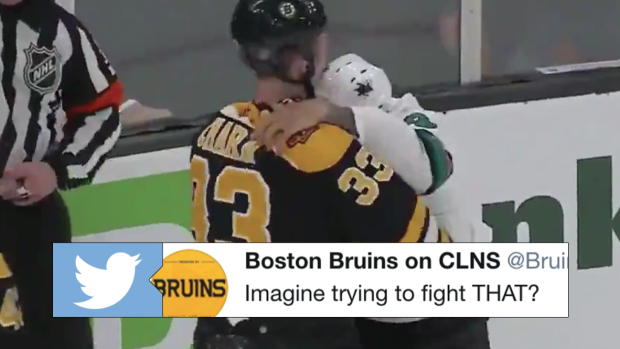 We have no doubts Zdeno Chara is one of the nicest people you'll meet, but there's NO WAY we'd ever want to get on his bad side on the ice.  Even if you're coming to the defence of a teammate or defending yourself, it's probably not worth it.

Tuesday night, Evander Kane learned that lesson after dropping the gloves with Chara for what he deemed to be a dirty hit to the head.  If there's one picture or screenshot that encapsulates why you should never fight Chara, it's this one:

Imagine trying to fight THAT?

At 41, Zdeno Chara is a force #NHLBruins pic.twitter.com/ARrQAXVU1Q

Zdeno Chara before and after Evander Kane decided to be fake tough 🤣 pic.twitter.com/wmz8GNMNlE

We understand why Kane fought and you've got to respect him for doing so, but Chara was always going to come out on top and that's just reality.