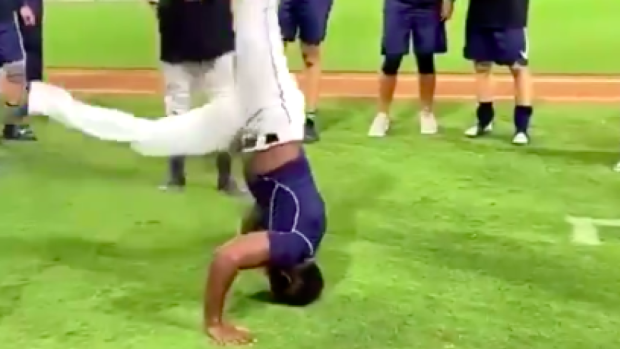 Although the Los Angeles Dodgers were able to bounce back and take Sunday’s Game 5, the sports world is still collectively reeling from the Tampa Bay Rays’ ninth inning heroics to take Game 4.

Going into the bottom of the ninth trailing by a single run, the Rays got a two-RBI double from Brett Phillips to walk things off, with Randy Arozarena scoring the dramatic clinching run.

Unfortunately, this celebratory dance-off video isn’t from the direct aftermath of Game 4, but it’s circulating all over again because, well, Arozarena and Phillips are an absolute vibe here. This video is actually from after the Rays beat the New York Yankees in the ALDS.

Arozarena has been the revelation of these MLB playoffs, and Phillips had the hit of his life to score Arozarena for the Game 4 win. What’s not to like about these two right now?

They’ll have to claw back from a 3-2 series deficit if they want to end the season with a championship in hand, but after a finish like this, you should be allowed to dance!